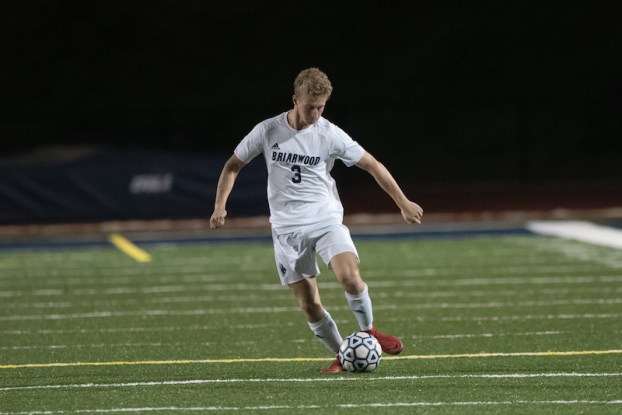 The Briarwood Lions, along with Westminster at Oak Mountain’s boys and Indian Springs’ boys, are headed to the 2018 AHSAA Soccer Final Four in Huntsville after picking up wins in the quarterfinal-round of the playoffs. (File)

For three Shelby County soccer teams, the journey isn’t over.

After a grueling season that started in the middle of February, Briarwood’s boys, Westminster at Oak Mountain’s boys, and Indian Springs’ girls all advanced to the AHSAA Final Four, which will be held in Huntsville Thursday, May 10, through Saturday, May 12.

While it was an impressive season for several soccer teams in the county, only those three are still alive and are two wins away from bringing home a state championship.

Here is a breakdown of everything you need to know for the three teams heading to the Final Four including, schedules, game times, opponents and stats.

The Briarwood Christian Lions’ boys soccer team has been ranked No. 1 in the Class 4A-5A standings for the majority of the 2018 season and will take a 20-game win streak into this year’s Final Four.

The Lions have been on a redemption path since dropping last year’s state championship game to Randolph by a final of 3-2 after leading the game 2-1 early in the first half.

Now they are back in Huntsville and looking to finish off what should’ve been finished a season ago with a Blue Map state championship trophy.

This year’s 4A-5A boys Final Four features Briarwood, St. Paul’s, Randolph and Arab, as each will be looking for the same outcome.

The Lions’ playoff run has featured a 10-0 shutout of Holt in round one, a 4-0 shutout of Trinity Presbyterian in round two and a 4-1 win against LAMP in the quarterfinals after falling behind 1-0 early in the game.

Briarwood (22-2-1) has given up more than one goal just four times this season and has 16 shutouts to its name in 25 games.

If Briarwood does go on to win, they will take on the winner of Randolph and St. Paul’s on Friday in the championship game at 5 p.m.

After falling in the second round of the playoffs to Bayside Academy a season ago, the Westminster at Oak Mountain Knights will have a chance at redemption as well, this time around in the Final Four.

The Knights will meet Bayside in a semifinal matchup in Huntsville on Thursday at 1:30 p.m. looking to advance to the state championship game.

Westminster made it to this point thanks to a second win this season against Montgomery Academy in the quarterfinals. The Knights took down Montgomery Academy 4-0 in the regular season and came back to win a tightly contested 1-0 matchup on Friday, May 4, to advance to the Final Four.

While they’ll hope for similar success in the semifinals, a matchup with No. 1 Bayside will be the Knights’ toughest test of the season. Bayside has won 23 games this season to only one loss, but a positive for Westminster is that one loss came to Montgomery Academy (A team the Knights have now beaten twice) by a final of 4-2.

Westminster has only lost two games this season, and has plenty of confidence heading into this matchup sitting at 22-2-1.

With a win, Westminster would advance to the state championship game on Friday at 7 p.m., where they would meet either West Morgan or Altamont for the title.

Last year, the Indian Springs girls soccer team lost to Westminster in the first round of the playoffs, who then went on to lose to Montgomery Academy in the second round.

This year, Springs will get a crack at Montgomery Academy, but in the Final Four, as they look to advance to the state championship game the following day.

Indian Springs has won its first two games of the postseason against Holy Spirit and Houston Academy by a combined 10-3 after strong performances on both ends of the field.

Now, they’ll be taking on a Montgomery Academy team that has fared just as well if not better in the first two rounds after a combined effort of 14-1 in its first two games.

Montgomery Academy, the No. 1 team in the 1A-3A classification, has won six state championships since 2001, including five in the last seven years and three in the last four years, making this a tough semifinal matchup.

Should Indian Springs go on to win, the team would advance to the state championship game on Friday at 5 p.m., where they would meet either West Morgan or Donoho. Springs lost to West Morgan 2-1 earlier in the season.

By ALEC ETHEREDGE | Sports Editor NORTH SHELBY – The Westminster Knights soccer program is off and rolling in the... read more