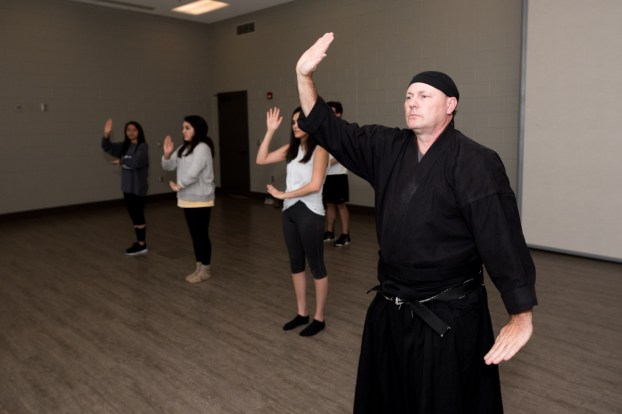 PELHAM – The Pelham Recreation Center is offering a way for teenagers to relax and unplug from all the stresses and distractions of their lives with a class called Meditation in Motion.

The class, taught by Jerry Wideman who is a 10th degree black belt in Ninjutsu, is designed for students ages 14-18 or beginning middle school through the end of high school. Thirteen year olds are welcomed to attend, but per rec center rules, anyone under 14 years old must be accompanied by an adult.

Students will learn an ancient art form called Qi Gong, which translates into “energy work” and has been around for about 5,000 years. It involves slow movements while focusing on breathing.

In addition to Qi Gong and Ninjutsu, Wideman is also trained in five styles of Shaolin Kung Fu.

“Students will be learning Qi Gong in the class, but I put motion to it,” Wideman said. “We’re trying to help kids feel more centered and become more confident.”

Wideman said the class, which is free for teens to attend, is ideal for teens who struggle with depression, stress, anxiety or lack confidence and self-esteem.

“It also helps those with attention deficits,” Wideman said. “It helps your focus and would be great for anyone who feels excluded or like they don’t belong. The class also has health benefits. It helps with inflammation in the joints and can help relieve some aches and pain.”

The class takes place every Wednesday from 4-5 p.m. at the rec center. Wideman said about 10 students attend the class on a regular basis.

“They’re not learning any self-defense techniques,” Wideman said. “This is to promote peace, harmony and a clear mind. It’s a way to assist teens in developing the skills they need to navigate life and become productive, strong and happy adults.”

Wideman has been training in martial arts for 44 years. He began at 10 years old when his father committed suicide in his family’s home.

“My uncle was coming back from Vietnam around that time and he was like my mentor,” Wideman said. “He suggested to my mother that I enroll in martial arts. I don’t think they thought I’d stick with it for this long.”

He lost his mother to cancer in the early 2000s and said others family members he was also close to have died.

Wideman said martial arts and his faith on God helped him through those hard times in life.

“My tragedies and hardships have helped me to have compassion and empathy for others,” he said. “I really just want to inspire kids to live their dreams, give them hope and show them that they can accomplish anything if they set their mind to it. Anything is possible through God, the human mind and the spirit.”

CHELSEA – A Chelsea man was recently indicted on multiple drug-related charges by a Shelby County Grand Jury during its... read more