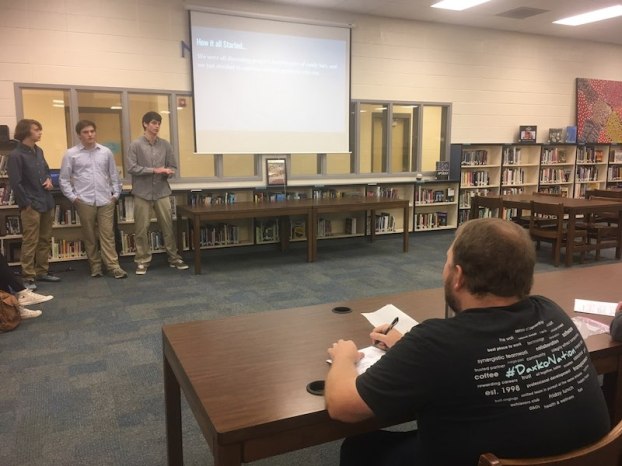 A team of students pitches their idea of a candy bar that consists of chocolate, Rice Krispy treats and caramel to a panel of city officials and local business leaders during the ChHS entrepreneurship class's simulation of "Shark Tank." (Reporter photo/Amalia Kortright)

CHELSEA – Chelsea High School students in Clarissa Clark’s entrepreneurship class brought their original ideas before a panel of local business and community leaders during the class’s simulation of the television show, “Shark Tank,” on the morning of Friday, May 4.

Students worked in teams to create a product and pitch it to the judges as part of the 200-point cumulative project. As a part of the project, students were instructed to come up with a brand for the product, talk about where their idea originated, seek “funding,” and figure out the target demographic for the product.

“I love the idea of connecting our education and business communities,” Clark said. “I was expecting three to four judges, and I got about 12 responses and they were so excited.”

While similar, smaller scale projects have been held in the classroom, Clark said this is the largest “Shark Tank” simulation that has occurred at ChHS.

To prepare for the project, Clark said her classes participated in “Shark Tank Fridays” once every week since the beginning of the school year.

“We go over episodes of ‘Shark Tank.’ We talk about what’s a good idea and what’s a bad idea,” Clark said. “At first, they had no clue that they were capable of coming up with these ideas. It opened up their creative minds.”

Sophomore Nicholas Ulderich said the presentation of his team’s project, in which they came up with the idea for a skate shop, went very well.

“It took a lot of time and effort, and we put a lot of work into it to make it presentable,” Ulderich said.

Junior Carson West said his team came up with the idea of a candy bar with all different types of ingredients and created a sample that was shared with the judges.

Ulderich said the project gave him a glimpse of real-world entrepreneurship.

“It was fun and creative, and other people should try this to get a look at what it would be like to start a business,” Ulderich said.

By GRAHAM BROOKS / Staff Writer HELENA–Helena High School was placed on a “soft” lockdown on Monday, May 7, after... read more