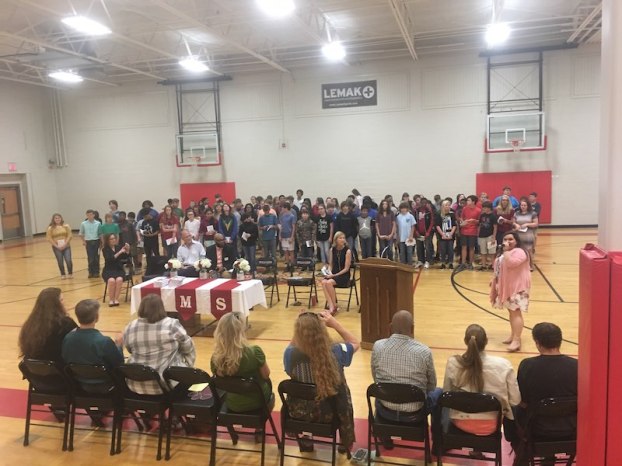 Seventh graders who had their poems published in a book as part of the Writing Our Stories program were recognized at a schoolwide assembly. (Reporter photo/Amalia Kortright)

COLUMBIANA – Columbiana Middle School celebrated the completion of its annual Writing Our Stories program for seventh graders at an assembly on the morning of Tuesday, May 8.

Language arts teacher Elizabeth Birdsong said students spent 10 weeks learning about poetry, going over poems published through the program from previous years and writing their own based on different topics.

“Once we got to the writing, it’s all them,” Birdsong said. “It’s not me teaching, it’s them exploring their thoughts and using their imaginations.”

Each seventh grader was able to pick their favorite of all the poems they wrote and have it published in a book entitled “Whispers in the Meadow.”

“The hook of the program is that they become published poets by virtue of a teaching writer,” Andrews said.

“It gives them something unique that can’t be taken from them,” Birdsong said. “They’re seventh graders and they’re published writers.

Shelby County Arts Council Executive Director Bruce Andrews said the Writing Our Stories program is a collaboration between SCAC and the Alabama Writers’ Forum, and has been hosted at CMS for eight or nine years.

“Programs like this don’t just happen. They have to be founded, funded and fine-tuned,” Andrews wrote in the book’s introduction. “The Alabama Writers’ Forum, along with our public school partners, couldn’t have done a better job of fine-tuning the program for the students involved. This program is indeed a jewel.”

Andrews referred to poetry as “the great equalizer,” and said it made students learn how to express themselves in a positive way.

“It’s a proven anti-bullying program. No matter your social status, everyone is encouraged to pour their heart out onto a piece of paper,” Andrews said.

“The hook of the program is that they become published poets by virtue of a teaching writer,” Andrews said.

Student Milo Pasquini said he enjoyed working on the poems and is proud to have one of his published.

“Now I can brag to my friends that I’m in a book,” he said. “More schools should do this.”

Pasquini said he published his poem, “The Woods,” to reflect on one of his favorite places.

“I love being in the woods,” Pasquini said. “It feels like I can get away from the outside world. I can hear the animals and basically do whatever I want.”

Andrews said Writing Our Stories is award-winning, curriculum-based and expanding to students in Montevallo and Vincent.