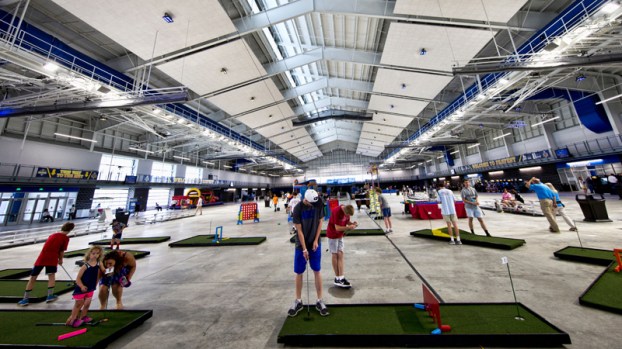 Hoover’s Finley Center, which is part of the Hoover Met Complex, has had an economic impact of $3.6 million in 2018, according to information provided by the complex’s management company. (CONTRIBUTED)

How much has Finley Center impacted Hoover economy?

HOOVER – The Hoover Met Complex and the new Finley Center have had an economic impact of $3.6 million in 2018, Hoover City Council members learned during a meeting on Monday, May 7.

Representatives of SFM, the company managing the Complex, presented a financial update six months into the fiscal year.

John McDonald, southeast regional director of SFM and account executive at HMC, said gross income for the time period was about $569,000, behind the budgeted amount of $597,000.

McDonald attributed the lower income to aspects of the center that are not yet operational and a low occupancy at the center’s RV park. Reduced rates at the park led to more revenue in April, McDonald said.

“I’m extremely proud of that because the revenue will come,” McDonald said.

After several initial months of expenses exceeding revenue as the operation found its footing, the Hoover Met Complex saw profits for the first time in January, McDonald said, and had a particular strong month in March because of several events held at the Finley Center.

HMC General Manager Monty Jones Jr. talked about local uses of the facility, attracting events and sponsorship opportunities, and SFM CEO Jason Clement announced the creation of a scholarship fund that provide access to the center for Hoover children who “wouldn’t ordinarily be able to play.”

“We’re going to put the first $16,000 of seed money in that program, and we’re going to challenge local businesses to participate as well,” Clement said.

The Council also received an update on the under construction athletic fields at the complex from a representative of Brasfield & Gorrie, who said the fields required for the Southeastern Conference Baseball Tournament would be completed prior to the tournament’s start date of May 22.

Other features yet to be operational include climbing walls and a sports performance area—all of which will improve the center’s bottom line, McDonald said.

“We feel like as time goes on, the numbers we’ll be seeing will move drastically,” he said.