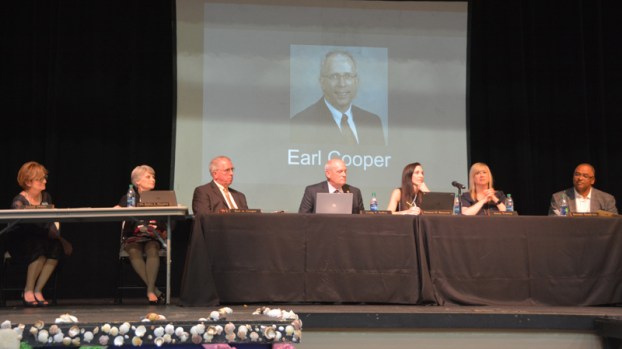 The Hoover City Schools Board of Education recognized President Earl Cooper at its meeting on Tuesday, May 8. Cooper, the Board’s longest-tenured member, did not seek re-appointment to the Board. (REPORTER PHOTO/STEPHEN DAWKINS)

HOOVER – Changes in leadership for Hoover City Schools—and trying to avoid a change in the superintendent position—were discussed at the HCS Board of Education meeting on Tuesday, May 8.

The group’s longest-tenured member, President Earl Cooper, was recognized as his time on the Board comes to an end after 10 years, a new president and vice-president were elected and Board members discussed an effort to retain Superintendent Kathy Murphy.

Murphy, who was named to the position in 2015, was one of three finalists for state superintendent of education but was not selected for the position.

Board members discussed altering Murphy’s contract in an effort to retain her.

Measures said to be on the table included an extension of the contract, which is currently set to expire in 2020; a $20,000 a year raise; a $40,000 contract fulfillment incentive payment; reducing the number of performance evaluations, which are currently annually; and reducing the number of vacation days granted the superintendent from 20 to 15 per year, which would benefit Murphy’s retirement.

Board members said retaining Murphy is important to maintaining positive momentum and avoiding a potentially costly search for a replacement.

“We have the best in the state with us right now,” Board member Craig Kelley said. “We cannot lose her.”

The Board voted unanimously for its attorney to work with the Board president and Murphy to draft a revised contract that would then be considered by the full Board.

Murphy said the state superintendent position is the only other job she has sought since her time with HCS.

“I am absolutely committed to Hoover City Schools,” she said.

Before the discussion about Murphy’s contract, Cooper was recognized for his service to the school system, as he did not seek re-appointment to the Board.

Cooper was presented with a plaque and kind words from his peers.

“This Board makes me a better superintendent, and they make me a better person,” Murphy said.

“This can’t be replaced, and sincere thank you for what you’ve done,” Kelley added.

Amy Mudano has been approved by the Hoover City Council to take Cooper’s place on the Board.

The Board also elected a new president, Kelley, and vice-president, Deanna Bamman.

Kelley and Bamman were the only two Board members nominated for the positions, and both were approved unanimously.