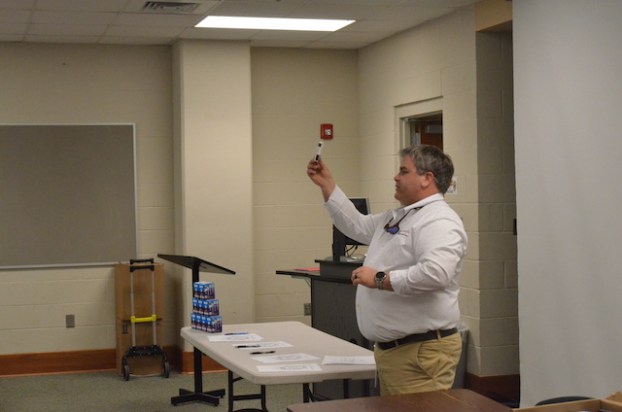 Representatives of volunteer rescue squads from throughout the Birmingham area watch as Office of EMS compliance specialist Jamie Gray demonstrates how to properly use an auto-injector kit to administer naloxone to an overdosing patient. (Reporter photo/Amalia Kortright)

HOOVER – Senator Gerald Dial, R-Lineville, and Kaleo, Inc. distributed free naloxone auto-injector kits to volunteer first responder agencies from throughout the Birmingham area during a press conference on Tuesday, May 8 at the Health Sciences building on the Jefferson State Community College Shelby-Hoover Campus.

Dial said the device will allow first responders to easily inject the opioid blocking medication, naloxone, into an overdosing patient to quickly revive them. According to Dial, distributing the kits to volunteer organizations will help combat the growing threat of opioids in Alabama, especially in more rural areas.

“We talked about volunteer rescue squads where the only money they get is when they have a barbecue, or a bake sale or some kind of rally. They have no resources to go out and purchase any devices. That would never happen,” Dial said. “Most of your cities and most of your big rescue squads that have money already have devices.”

During the press conference, contact persons from each of the first responder agencies present watched a training video and an in-person demonstration from Alabama Department of Public Health Office of EMS compliance specialist Jamie Gray. Gray said each device contains a dose of two milligrams, which is injected into the patient’s thigh.

Each of the agencies were given a copy of the video, which all members were instructed to watch before they received the kits.

While the opioid crisis is not as severe in the North Shelby Fire District’s jurisdiction as it is in other areas, Chief Buddy Tyler said the kits will be useful for stopping the ones that happen. Typically, he said overdoses in the North Shelby area involve heroin.

“We’ll have runs of overdoses. We’ll have two to three back to back, and then it will be a week or so before it happens again,” Tyler said.

Because the kits inject naloxone, Tyler said it will make it easier to administer to a patient, rather than administering the drug via IV or nasally.

Dial said Kaleo, Inc. is donating a total of 871 devices, which will be placed in every volunteer rescue unit vehicle in Alabama. Kaleo, Inc. will also be replacing each device up to two times.

“Technically, we’re getting over 2,700 devices, because if you use one, they’re replacing one,” Dial said. “If you put the pencil to this, you’re talking about a $12 million gift that the state of Alabama got without one cent cost to the taxpayers.”

Dial also commended the first responders who participated in the press conference and training session.

“There is nothing better than helping your fellow man. God bless you,” Dial said. “What can you do that’s better than saving lives?”

In addition to saving lives, State Sen. Jim McClendon, who serves as the chairperson for the Alabama Senate Health and Human Services Committee, said the distribution of naloxone may be a turning point for many who receive it.

“Without saving the lives, you don’t have a chance to rehabilitate anybody. This is going to give folks a second chance. Most likely it’s going to be folks who’ll realize it’s time to reconsider their lifestyle,” McClendon said. “We’re not only going to have some lives not only saved, but eventually they’re going to be turned around and go back to society, develop the self-esteem they need and become productive citizens.”

Alabama House District 43 Rep. Arnold Mooney said he has firsthand experience with losing a loved one to a drug overdose. He said the accessibility of the kits will prevent similar tragedies in the future.

“This could have saved his life. It could have saved a lot of heartache in that family and among the other families that loved that family. Serving on the House Health Committee, we’ve seen so many of these types of things happen over the last four years,” Mooney said. “Life is so precious from conception to death, and we’ve got to do everything we can to save lives. This is what this is about.”