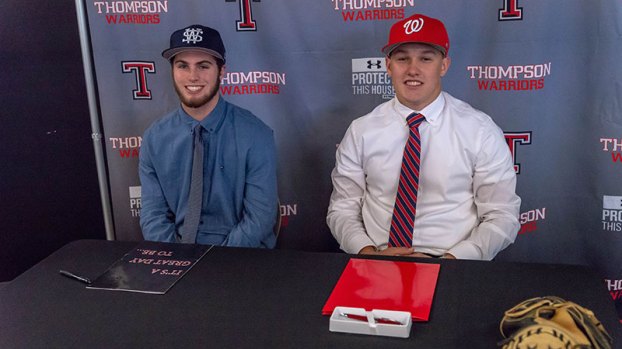 THS baseball players J.C. Parker and Colby McClain will be continuing their careers at the next level after they signed college scholarship offers during a May 8 ceremony. (Reporter Photo/Neal Wagner)

ALABASTER – A pair of strong contributors to Thompson High School’s successful baseball program over the past few years will be continuing their careers at the next level, after they inked scholarships with a pair of in-state colleges during a May 8 ceremony.

The duo has played a major role in the team making the playoffs multiple times – and even a state championship appearance – during their time with the Warriors.

“I’ve got memories of him when he was a ninth-grader, throwing game three against Mountain Brook and Sparkman, and he’s had over 20 victories with our program over his four years,” THS head coach Pat Hamrick said of Parker. “This year, out of nowhere, he led the team in hitting with a .377 (batting average). He had a great year.

“Colby, he battled through some arm problems to start the year, and ended up batting .326 and had the memorable home run when he hit the walk-off home run against (Tuscaloosa) County High. That’s something he’ll always remember,” Hamrick added. “They’ve got bright futures ahead of them when they continue playing in college, and they are going to be missed.”

Parker played a significant role in one of the most memorable THS baseball games in recent memory: The Warriors’ thrilling game two win against Tuscaloosa County on April 12 to keep the THS playoff hopes alive. McClain hit a solo walk-off home run with the game tied at 6-all with a 2-2 count to win the series with the Wildcats in a game crucial to the Warriors’ playoff hopes.

McClain had a batting average of .326 this season with an on-base percentage of .547. He ended the season with 12 RBIs, two doubles and 11 singles, and played 41.2 innings as catcher this season. He allowed just three passed balls and eight stolen bases.

Parker held a batting average of .377 this season with an on-base percentage of .395. As one of the team’s biggest offensive threats, he hit 22 singles, 10 doubles and two triples leading to a total of 25 RBIs.

Parker was also one of the top pitchers for Thompson this season. He pitched a total of 61 innings and finished the season with a record of 2-4 and an ERA of 3.213. In six of the 11 games he started, Parker pitched six or more innings.