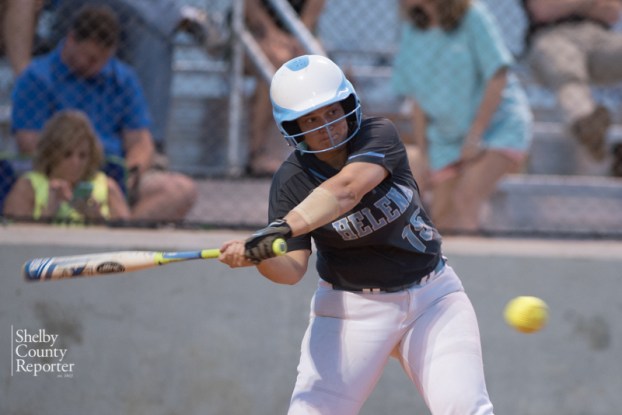 Helena’s KK Wilson finished with two hits and two RBIs in a win over Wetumpka to open regional play on May 10. (Reporter Photo/Keith McCoy)

TROY–The Helena Huskies softball team came away victorious in the first game of regional play by defeating Wetumpka 7-4 on Thursday, May 10, as they will now advance to round two of the winner’s bracket.

The Huskies are one of eight teams competing in the Class 6A South Central Regional as they will try to qualify for a spot in the state tournament.

In round one, Helena took on Class 6A Area 6 runner-up Wetumpka and after falling behind a run early, rebounded to win 7-4.

Down 1-0 entering the bottom of the first inning, Helena quickly responded as Jamie Gregg led off the inning with a double. She would come around to score one batter later as Chaney Handley collected an RBI-single to tie the game.

Later in the inning, KK Wilson hit a two-RBI double to score Katie Lively and Grace Robertson to give the Huskies a 3-1 lead.

In the middle innings Helena extended its lead to 7-1 and despite a late game comeback effort, the lead was too great for the Indians.

In the final inning, Wetumpka hit four straight singles cutting Helena’s lead to 7-4 but starting pitcher Avery Barnett closed out the game with a fielder’s choice and a strikeout to get the win.

Barnett pitched a complete game and struck out six Wetumpka batters to get the win.

At the plate, Helena was led by Robertson, Wilson and Peyton Wilkins who all had two hits apiece.

By ALEC ETHEREDGE | Sports Editor HOOVER – After serving as head basketball coach of the Helena Huskies for the... read more