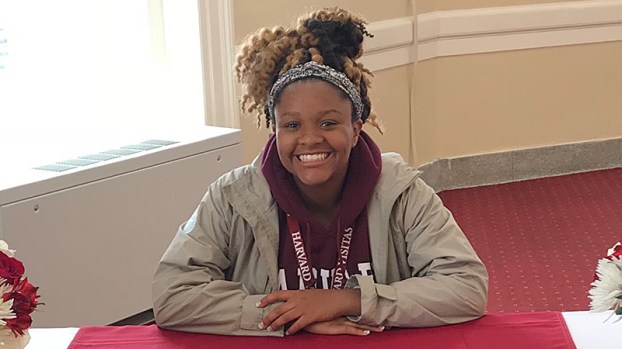 Thompson High School senior Jacqueline Tubbs will be attending Harvard College next fall after she was accepted to the prestigious school last December. (Contributed)

“She told me ‘That’s the only place I’m going to apply. If I don’t get into Harvard, you can pick where I go, mom,’” Jacqueline’s mother, Venita, said during a May 9 interview. “After she applied, she fasted and prayed about it from September until December.”

After months of waiting, Jacqueline received the letter she had hoped for in December 2017:

“Dear Jacqueline, Congratulations! I am delighted to inform you that the committee on admissions has admitted you to the Harvard College class of 2022 under the early action program. A transformative college experience awaits you here.”

Jacqueline, who will graduate from THS this month as a valedictorian with a 4.6 GPA because of her heavy Advanced Placement course load, earned a spot in what her mother said was the lowest Harvard acceptance rate in history at 4.5 percent.

During her four years at THS, Jacqueline has been a part of the THS volleyball program, and was a team captain each year she participated.

“She has had a loved and eventful senior year with being chosen as a Senior Superlative by Thompson’s faculty and staff, homecoming court by her fellow students and Best All Around by her fellow classmates,” Venita Tubbs said.

Jacqueline attends The Harvest Place Christian Church in Columbiana. Last summer, she traveled to France, Italy and Switzerland on an educational tour, and will travel to England and Scotland this summer. She plans to study abroad during her time at Harvard in the upcoming summers.

In 2015, Jacqueline overcame the loss of her father, Jeffery, and she has maintained a job while at THS and will continue to work while pursuing a doctorate at Harvard in the hopes of one day becoming a psychiatrist.

Venita Tubbs said Jacqueline’s ability to juggle schoolwork, extracurricular activities, a job and personal tragedy played a role in her acceptance to Harvard, and also helped her to secure a full ride to the college of her dreams.

“I am just so excited for her. I think she is so deserving because she is definitely a well-rounded young lady,” Venita Tubbs said. “She put her mind to it and she did it. Even if she wasn’t going to Harvard, I’d still be so proud of her.”

HOOVER – Changes in leadership for Hoover City Schools—and trying to avoid a change in the superintendent position—were discussed at... read more