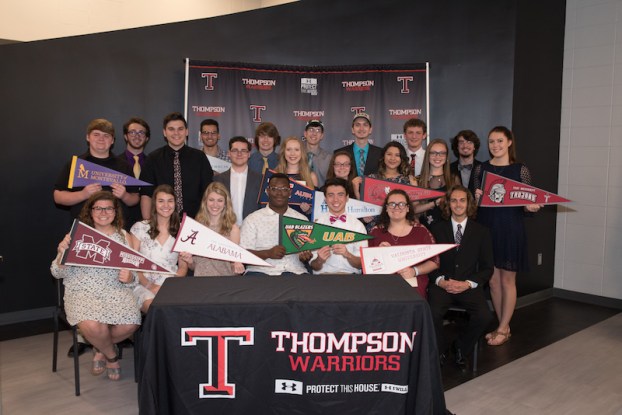 Graduating students at THS announced their plans to perform at 10 different colleges and universities during the school's first signing ceremony for band members. (Reporter photo/Keith McCoy)

ALABASTER – A total of 24 Thompson High School band members declared their intent to perform at a collegiate level during the school’s first band signing ceremony on Wednesday, May 9.

While all of the past THS signing ceremonies were for athletes in the past, Assistant Band Director Justin White said it was important for members of the band program to receive the same recognition. This year, White said graduating students earned over $140,000 in band scholarships.

“These musicians have given so much to us, and this was a good opportunity to give back to them,” White said.

Daniel Garcia-Barnett was the first student to be recognized, and announced intent to perform at Dartmouth College. He received his certificate of intent from THS Band Director Jon Bubbett.

Ana Elisa Sevilla received her certificate of intent to perform at Hamilton College from Bubbett.

Alex Jordan declared her intent to perform at Mississippi State University, and received a certificate from MSU alumnus Henry Long.

Grace Craft received a certificate of intent to perform at Valdosta State University from Bubbett.

Joseph Ardovino Jr. and Joseph Lide were presented with certificates of intent to perform at the University of Montevallo by UM Director of Bands Joe Ardovino.

Alabaster City Schools Superintendent Wayne Vickers said the signing ceremony is an example of the high quality of the THS band program’s students and directors.

“This, in my opinion, shows that we have so much talent and such great leadership by our band directors and our students,” Vickers said. “This band program is something I consider to be one of the shining examples of what’s right with Thompson High School and ACS.”

Auxiliary Coach Zandra Morris said she was especially proud of Talley and Blaising. Blaising is set to perform with the Tiger Eyes majorettes at Auburn University, and Talley will perform as the school’s second Crimsonette at the University of Alabama.

“I couldn’t be more proud. They’ve worked so hard, and there are only a few (majorettes) at each place,” Morris said. “It shows how talented and hardworking they really are.”

For White, the class of 2018 is special. When he first began teaching at THS, he said the students at the signing ceremony were freshmen.

White said he is proud of each student who was honored, and looks forward to seeing what they will accomplish in the future.

“These are Alabaster’s finest, and they’re going to represent us so well,” White said.