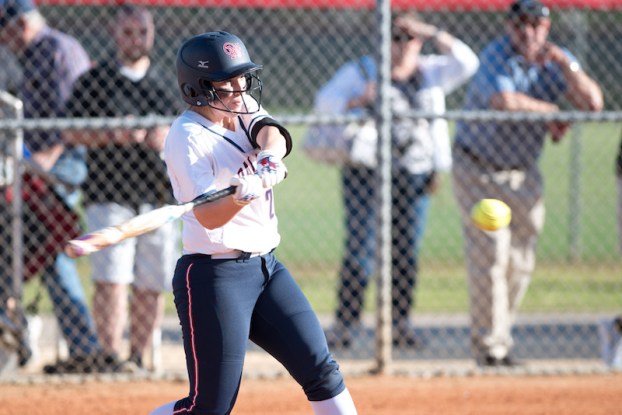 The Oak Mountain softball team swept its regional opponents after dominating Tuscaloosa-County and winning in eight innings against Thompson to advance to the 2018 Class 7A State Tournament. (Reporter photo/Keith McCoy)

TUSCALOOSA – With two straight wins against Tuscaloosa County and the Thompson Warriors, Oak Mountain’s softball team is headed back to the state tournament, a goal that has been denied for a while.

The Eagles used a dominant 13-7 win against Tuscaloosa County to kick off the Class 7A North Central Regional before winning a 7-6 thriller against Thompson in extra innings on Friday, May 11, to win the regional tournament and advance to the state tournament unscathed.

Trailing 6-3 heading to the top of the sixth inning against Thompson, Oak Mountain was running out of time, but if one thing has become clear throughout the season, it’s that the Eagles aren’t scared of scoring runs late.

Even crazier, Oak Mountain pushed its luck even more by putting two outs on the board through two batters in the top half of the sixth.

Everything after that just went right for the Eagles.

Riley Sullivan and Maddie Katona hit back-to-back singles, the second of which from Katona was able to drive in Sullivan. Jenna Galloway added a third consecutive hit with a double to on a fly ball to deep center field that drove Katona in as well to cut the deficit to 6-5.

Abbi Brown then hit a hard ground ball that could have gotten Thompson out of the inning with the lead, but instead ended in an error that allowed Galloway to cross the plate to tie the game at 6-6 as the Eagles had erased a three-run deficit.

After a scoreless seventh inning, the two teams went into extra innings with a spot in the state tournament on the line.

Oak Mountain couldn’t have gotten off to a better start in the top of the eight as Katona led off with a single before Galloway became the second runner aboard thanks to an error.

After a fielder’s choice led to the first out, Cassady Greenwood hit a deep fly ball to right field that allowed Galloway to score on the throw after tagging up to put the Eagles on top 7-6.

Looking to pull off a comeback, Thompson’s Kennedy Foote gave the Warriors a chance in the bottom half of the inning with a lead-off double to immediately put a runner in scoring position with no outs.

That was followed by a lineout from Mikayla Touhey to put one down in the inning.

Madison Plunkett then singled to left field, but it wasn’t deep enough to bring Foote home as she was only able to move over to third.

That became key because during the next at bat, Oak Mountain pitcher Lacy Marty got Thompson’s Abby Kellogg to hit into a game-ending double play that sent the Eagles on to the state tournament.

Greenwood ended the game 2-for-5 with a team-high two RBIs, while Katona finished the game 3-for-4 with an RBI. M’Kiyah Mitchell also added two hits in the win for the Eagles.

Marty pitched all eight innings for Oak Mountain in the circle and gave up eight hits and three earned runs to pick up the win.

By ALEC ETHEREDGE | Sports Editor TROY – After dropping all four games during the regular season and the area... read more