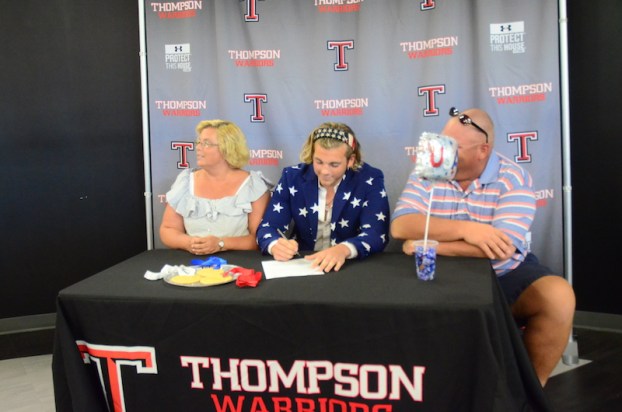 ALABASTER – Thompson High School student Viktor Turek signed a letter of intent to join the University of South Alabama track and field team as a discus thrower and a hammer thrower during a ceremony on Thursday, May 10.

“This is a very special day,” THS Principal Dr. Wesley Hester said. “This is much more than signing on a line. It’s a representation of a whole lot of work, dreams and effort.”

According to THS track coach Christopher Schmidt, Turek recently set a discus throw record for 7A teams at the 2018 AHSAA State Track and Field Championships in early May.

Schmidt said Turek is a hard worker who is typically the first one to arrive at practice and the last to leave.

Schmidt said Turek is a leader on the track team, and is consistently looking out for his teammates.

“You definitely are a role model, with great academics, and a great athlete,” Schmidt said.

Turek said he has overcome a lot to get where he is today. In early 2017, Turek suffered from a traumatic head injury at football practice.

He sustained a fractured skull, a crushed orbital bone and a dural tear that caused a spinal fluid leak, and had to undergo several groundbreaking surgeries.

Turek was still suffering from double vision and balance issues when track season began. He said he was practicing and competing “as well as I could.”

Turek said his athletic scholarships will cover 18 percent of his tuition, cover expenses for books and award him a monthly $100 stipend. Additionally, Turek is set to graduate as a valedictorian, and has earned $14,000 in academic scholarships.

After he signed, Turek thanked his mother, father and sister for their support.

As a USA alumnus and former track team member, Schmidt said he is proud to see Turek at his alma mater.

“We are extremely excited to have him at Jaguar nation,” Schmidt said. “Big things are going to happen at South with Viktor.”