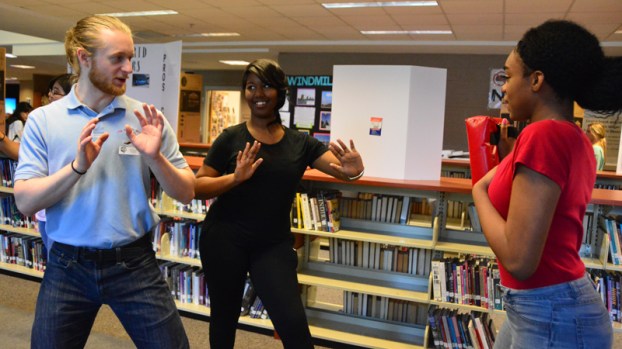 HOOVER – Keith MacConkey and Wyatt Hood know the most effective self-defense strategy is avoiding danger, but when a person is threatened, basic knowledge of martial arts can help.

MacConkey and Hood, of Bluff Park-based USA Martial Arts, hosted a self-defense class for students at Spain Park High School on Wednesday, May 9.

“A big part of self-defense is not ending up in the situation to begin with,” MacConkey said and encouraged students to be aware of their surroundings.

The techniques taught in the class were designed to give students confidence about how to handle situations, and to provide an opportunity for escape.

“The idea is that if you have to use these things, you’re prepared,” he said.

McConkey used the analogy of a wolverine and bear. Though the bear is significantly larger and stronger, it will avoid the wolverine because of its ferocity.

“You’re trying to change someone’s mind from what they were planning on doing,” he said. “Predators like easy prey. We want to have that wolverine mentality. We’re not there to defeat that person; we’re there to hurt them and change their mind.”

MacConkey began by discussing the importance of confident posture, how to face an attacker with hands up and open, and how to strike with open hands.

He also discussed escaping common attacks and positions, such as a choke hold, and avoiding hitting one’s head during a fall.

“If you ever get knocked down, it’s especially important to keep your head off the ground,” MacConkey said.

USA Martial Arts holds such classes at various schools and businesses, MacConkey said, along with appointments for group sessions.

NORTH SHELBY – A Mother’s Day Tea at Inverness Elementary School on Thursday, May 10, taught lessons of respect and... read more