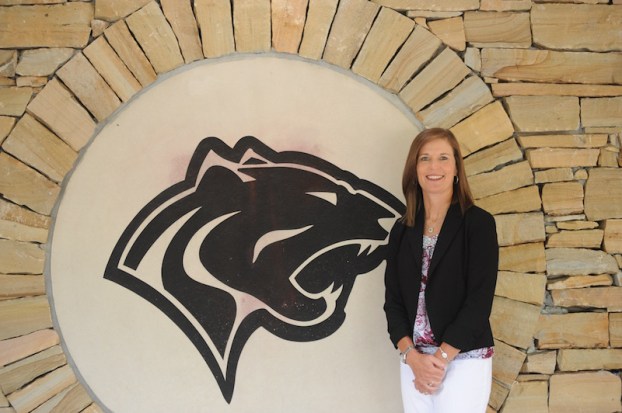 Sabrina Tutchtone, who has been a softball coach and AP U.S. History teacher at Pelham for five years, has officially stepped into the role of assistant principal at Pelham High School. (Reporter photo/Alec Etheredge)

PELHAM – When she stepped down from role of head coach of the softball team to assistant at Pelham High School last summer, Sabrina Tutchtone knew exactly what she was doing, but she wasn’t quite sure the path that was set to unfold in front of her.

At the time, Tutchtone stepped down to put more attention on schooling and her work toward becoming an administrator, but it was still up in the air as to where she would end up once her administrative degree had been earned.

“I finished my certification in December,” Tutchtone said. “I really didn’t know what opportunities there would be at Pelham. To be honest, at first, I never thought I could become an administrator at a school I have been teaching at for so long, that’s just hard to do. The more I thought about it though, I just couldn’t imagine leaving here.”

The timing was on par with Tutchtone’s imagination. Moving through the 2017-18 school year, Pelham High School and first-year principal Amanda Wilbanks were in search of a new assistant principal.

“When I met her three years ago, I knew she was a leader,” Wilbanks said. “We have made sure she is on every leadership opportunity at the high school to build her leadership capacity and get her ready for this position. When it came time to look for an assistant principal, it was extremely easy to choose her.”

Tutchtone, who has taught Advanced Placement U.S. History at Pelham, was named Pelham High School Teacher of the Year in 2014, which first showed her leadership and ability to fulfill this role.

“She’s a legend at Pelham,” Wilbanks said with a chuckle. “Honestly, I know that sounds like a silly word to use, but people from surrounding areas know her. They know her reputation as a good coach and an extraordinary teacher.”

Wilbanks added that her co-workers at Thompson when she was working there knew who Tutchtone was because of her good reputation.

“It means the world to have someone that has that good of a reputation coming into a leadership role,” Wilbanks said. “People are automatically going to respect and know she’s going to do a good job because they’ve seen her do it. If you can build that reputation in five years, imagine what she can do in five more.”

Tutchtone said if you would have asked her three years ago would she have given up teaching for an administrative role she would have said absolutely not.

But thanks to Pelham City Schools Superintendent Dr. Scott Coefield, that changed.

“When Helena and Pelham split a few years ago, Dr. Coefield came in and gave me some leadership roles,” Tutchtone said. “With him giving me some of those roles, I saw another side of this that truthfully I wish more teachers could see. With doing that, I thought to myself, ‘I can do this. I actually like this.’”

Whether it be her time as a teacher or a softball coach, Tutchtone has learned the key tools it takes to be in an administrative role, which is what excites both her and Wilbanks.

“She will look for things to do and improve, not just wait to be told what to do which is huge,” Wilbanks said. “Most of this job is about communication and being a leader and that’s something you can observe her doing when she’s coaching softball or teaching her APUSH classes.”

Following those remarks, Tutchtone chimed in saying, “Who are we talking about? Am I even supposed to be in this meeting,” joking about all of the compliments directed toward her.

Tutchtone has already started doing certain tasks in the administrative role and it’s been similar to that of a curveball in softball.

“It’s been eye opening so far to see the other side of things,” she said. “I just look at it as another challenge and what are we without challenges? I’ve always said that to my players so I have to live by that as well. There really is no schedule and things can change in the blink of an eye so flexibility is key.

“It’s not about what’s thrown at you, it’s about how you adjust your swing. This is just like that.”

While it’s going to be a collaborative effort between Tutchtone and Wilbanks, both have the same goal in mind, helping Pelham’s students and teachers be the best they can possibly be.

“I’ve had the opportunity to have an impact on so many kids and I’ve loved that aspect of my job,” Tutchtone said. “Now I get to do the same with teachers as well. Hopefully I can be a leader for them now after doing that for 25 years. My hope is to be able to see their side of things and not forget that. I want to make an impact on them in my leadership role.”

Under the direction of both of these leaders, Pelham High School seems to be going in a good direction heading into the 2018-19 school year thanks to the collaborative leadership of both administrators.