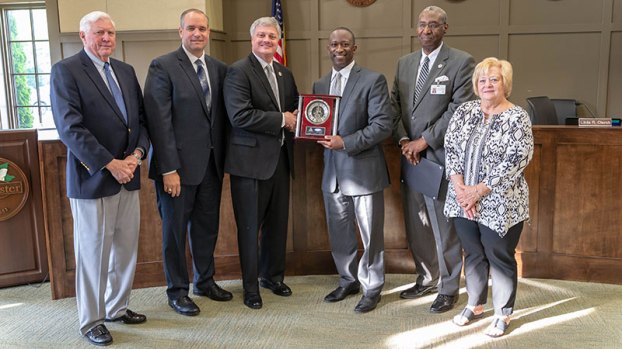 Alabaster School Board members honor outgoing board member Ty Quarles, third from right, for his service during a May 14 meeting. (Reporter Photo/Neal Wagner)

ALABASTER – Members of the Alabaster Board of Education thanked board member Ty Quarles for his dedication to serving the city’s students over the past several years during his final regular meeting as a member of the School Board on May 14.

Quarles is a charter member of the Alabaster Board of Education, which was seated by the Alabaster City Council in 2012, and will be replaced at the end of this month by new School Board member Jamia Alexander-Williams, who was appointed to the seat by the City Council last month.

“Mr. Quarles, thank you for your friendship and your service,” said Alabaster School Superintendent Dr. Wayne Vickers. “I know you’ll still be cheering on the Warriors, and I’m happy we get to celebrate your service tonight.”

Vickers and Quarles’ fellow School Board members honored him during the meeting with an ACS clock and a certificate honoring his service.

“This has been a lot of fun, and I’ve really enjoyed it,” Quarles added. “You are great people, and I’m going to miss you.”