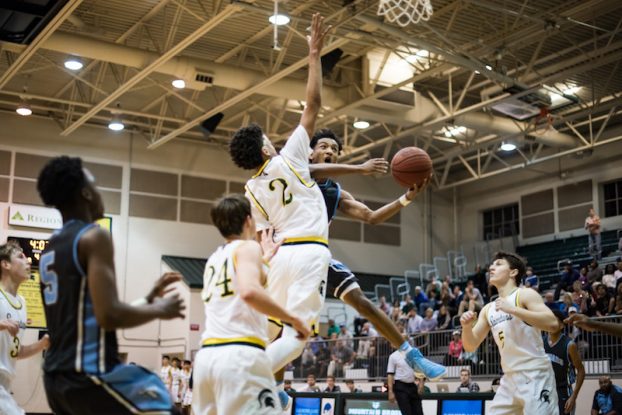 Jamal Johnson, guarded above by Trendon Watford, has announced he will transfer to Auburn University to continue his basketball career. (File)

Former Spain Park and University of Memphis basketball standout Jamal Johnson made a big announcement on Wednesday, May 16.

After one season with the Memphis Tigers, Johnson announced his transfer from the university back on April 3, reopening his recruitment process to attend a different school after head coach Tubby Smith was fired.

On Wednesday morning, the rising sophomore posted a tweet to Twitter saying “Next chapter,” with the hashtag of War Eagle, making it official that the guard will be moving from Memphis to the plains of Auburn to attend Auburn University starting this year.

It’s a big get for Bruce Pearl and the Auburn Tigers after Bryce Brown, Austin Wiley, Mustapha Heron and Jared Harper have already declared for the NBA Draft happening on Thursday, June 21.

Of the four players to declare, Heron is the only one to hire an agent, which leaves the door open for the other three to return to the university for another year, which with Johnson would give the Tigers a loaded roster and the possibility of Wiley and Johnson being on the same team together again.

The duo starred at Spain Park High School together and led the team to its second Final Four appearance in school history, while both were up for Player of the Year in the county and the state every year they took to the court for the Jaguars.

The two, who are extremely good friends and moved to the Hoover area to attend Spain Park together, were a dynamic tandem with Wiley in the post and Johnson running the show from the guard position.

Johnson will sit out the 2018-19 season, meaning Wiley would have to stay two more years (unlikely) for the duo to join forces again, but either way the future Auburn Tiger is excited to play for Pearl and help the Tigers build off a successful SEC regular-season championship season in 2017-18.

At Memphis, Johnson quickly earned a role as a key starter for the team starting 27 of the 34 games he played in after making a name for himself early in the season.

He went on to average 26.5 minutes per game as a freshman posting 6.9 points, 3.3 rebounds and 1 assist per game. His biggest highlight of the season came against the University of Connecticut where he logged 18 points.

After sitting out the upcoming season, Johnson will have three years of eligibility left at Auburn.

Legends on the links: Celebrities tee it up at Regions Pro-Am

By ALEC ETHEREDGE | Sports Editor HOOVER – It looked more like a Saturday in the fall with the amount... read more