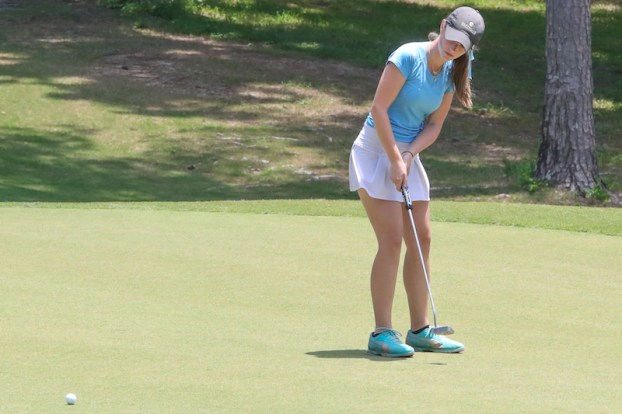 Caroline Waldrop won the 2018 Class 7A individual state championship to close out her storied career with the Jags. (For the Reporter/Dawn Harrison)

MUSCLE SHOALS – An unbelievable high school golf season has come to a close in Shelby County with four teams finishing as top-3 teams in their respective classifications at the 2018 AHSAA State Golf Championship held at Robert Trent Jones’ The Shoals Monday, May 14, through Tuesday May 15.

Spain Park’s boys and girls both grabbed top three finishes in the 7A Classification, while Briarwood accomplished the feat in Class 5A and Vincent did the same in Class 2A.

While highlighting the team aspect for golfers that don’t get to enjoy that year round is important, the biggest highlight came from an individual player.

In her final year at Spain Park, Caroline Waldrop closed out her storied career with an individual state championship in the girls Class 7A tournament.

Waldrop shot rounds of 74 and 69 to pick up the low medalist honor by one stroke over Auburn’s Morgan Jones and Hoover’s Carson McKie.

Waldrop was forced to sink a decent length putt on the 18th green to take home the individual honor, but calm, cool and collected, she drained it for her ninth par in a row on the back nine after shooting a solid 3-under par 33 on the front nine.

After closing out day one with three bogeys in her final four holes, Waldrop got a confident start on day two with that 33 on the front nine, but the two consecutive birdies she made on holes eight and nine gave her the lift she really needed to vault into the lead before going on to play consistent par golf the rest of the way to bring home the state championship.

She became the second individual state champion in school history after Hannah Collier did it back in 2009 when she led the Jaguars to their first overall team championship.

As a team, Spain Park’s girls came in looking to defend its 2017 state championship, but couldn’t rebound from a tough day one. The Jags did go on to finish in third with an aggregate total of 37-over par, which was 23 shots behind second and 24 behind first. There day-two total of 229 was 11 strokes better than day one’s total of 240, but Hoover and Auburn shot no higher than 224 on either day to put forth dominant efforts as Auburn got the one-stroke win for the title.

Spain Park’s boys, who missed out on even getting out of their section last year, played some of their best golf of the year and just missed picking up their seventh state championship in school history.

While the Jags and Mountain Brook traded off wins throughout the regular season, the Spartans hit a hot streak over the final three weeks of the season and posted crazy-low scores.

In the state tournament, Mountain Brook shot a dreamlike team total of 13-under par for an aggregate score of 544. That beat out the Jags by 20 strokes.

Most years, Spain Park’s total of 12-under par for the tournament would have been good enough to win a title, but the Spartans were just unconscious.

Of the five golfers that teed it up for Mountain Brook, four were under par by at least three strokes and Gordon Sargent and William Wann both shot two-day totals of 11-under par to tie for the low medalist honor.

Ethan Hagood finished just two spots off of that total to finish in third place at 9-under par, while Nick Dunlap ended the tournament at 4-under par to finish in solo fifth.

Behind that, Carter Goodwin shot 2-over par, Landon Carner shot 4-over par and Matt Stuart shot 6-over par, all of which were solid scores to close out the season.

Outside of the two Spain Park teams, Briarwood and Vincent both picked up third place finishes to close out special seasons.

The Lions finished behind state champion St. Paul’s as well as Russellville in second. Briarwood missed out on passing Russellville for second by just three strokes.

On day one, Briarwood shot 21-over par as a team, while Russellville was seven strokes behind that total, but the Lions were nine strokes worse on day two shooting 30-over par. Russellville, however, was eight strokes better and beat the Lions by 10 shots on day two.

Briarwood was led by Slade McCraw and Drew Schroeder, both of who shot 9-over for the tournament to finish in a tie for seventh. Behind that Cooper Blevins was 12-over, Matthew Herritt was 21-over and Andrew McCary was 24-over.

In just its second year with a high school golf team, the Vincent Yellow Jackets also ended their season with a third-place finish.

The Jackets shot a team score of 133-over par, which was a good way down from Westbrook Christian’s second-place total of 74-over par and Donoho’s championship winning score of 38-over par, but something the Jackets were proud to accomplish.

Two years ago, the team didn’t even exist, and two years later the Yellow Jackets have proven themselves as one of the three best teams in the state.

Vincent was led by Brooks McKeller, who shot a 24-over par during the two-day tournament to finish in 11th overall. After that, Nathan Fernandez was 32-over, Dusty Davis shot 34-over and Cole Fincher finished 43-over.

By ALEC ETHEREDGE | Sports Editor CULLMAN – An impressive track and field season came to an end for the... read more