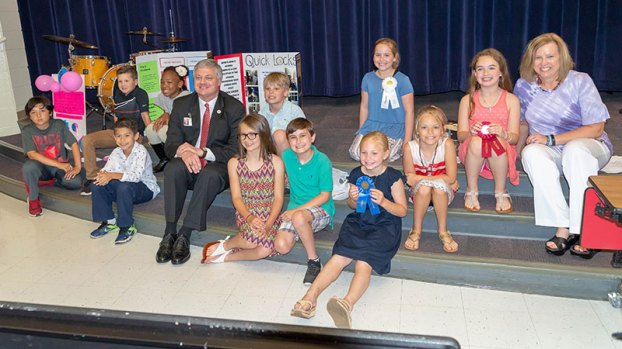 ALABASTER – A group of Creek View Elementary School students are already working to solve real-world problems by inventing everything from a modular backyard dog park to self-sanitizing hospital food tables, and showcased their inventions during a May 16 ‘Shark Tank’ style competition.

Over the past several weeks, 47 students in Melissa Foster’s gifted education class have been working on their inventions in preparation for the competition. Foster narrowed the class down to the top 11 finalists, who presented their products to a panel of local judges in the school’s cafeteria.

“I’m so proud of my students, and I know the judges are going to see why,” Foster said before the competition. “They are inventing things that will meet the needs of the entire world.”

Emily Reid was crowned the winner of the competition with her product “Puppyground,” which is a canine playground designed specifically for small dogs. The playground is modular, meaning it can be scaled to fit in backyards of any size. The full-size playground features an obstacle course, a tunnel, an automatic treat dispenser and more.

Aislynn Jay came in second with her invention “Aislynn’s Attaches,” which is a pouch containing straws with hooks attached to them intended to store and transport jewelry pieces tangle-free.

Kenley Paige Smith won the third-place award with her invention the “Solar Mailbox Light,” which illuminates the inside of a mailbox to allow residents to see if there are bugs or pests while they are retrieving their mail.

The following other students also advanced to the competition’s final round:

-Journey Rudolph invented the “Sani-Table,” which is a hospital table for children and adults built with self-sanitizing materials.

-Jude Young invented “The Blind Buddy,” which is a wearable device hooked up to a GPS system intended to help blind individuals navigate without a service dog or walking stick.

-Rhett Cooper invented the “Ear Band” and “Hearmuffs” devices, which are intended to be worn in hot weather and cold weather, respectively, while walking or running outdoors. The devices are built into a hat and earmuffs, and allow runners to listen to their music with built-in earbuds and Bluetooth connectivity.

-Graham Rickman invented “The Reading Mic,” which is a device and app allowing students to read books into a microphone for their teachers to track their progress in an attempt to raise the students’ reading skills.

-Manzur Reyes invented “Germs B Gone” chewing gum, which comes in multiple flavors and cleans and disinfects the chewer’s mouth.

-Avery Sorrell invented “The Reducer,” which was produced using a 3D printer and is a regulator placed on bottles of hand sanitizer to ensure the correct amount of sanitizer is distributed with each pump.

-Avery Knierim invented “Pup Pops,” which are dog-friendly popsicles containing a bone for a handle. The popsicles can be used to more easily give dogs medication.

-Allie Rae Ellis invented “Quick Locks,” which is a remote control system for door locks requiring a thumbprint or passcode to operate. The system can be controlled from a watch or a remote, both of which are included with the product.