HARPERSVILLE – A Harpersville native is celebrating the release of her first novel, “Missing Isaac,” which began hitting shelves in January.

Author Valerie Luesse said she was inspired to write “Missing Isaac” from old stories that had been passed down through her family. One of those tales, which mirrors the plot of the novel, centered around a black farm worker who had gone missing in a small town during the 1960s. 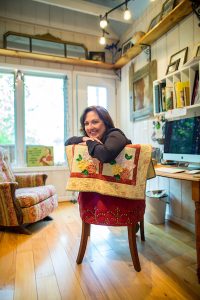 “It kind of takes him on this journey and opens his eyes to a lot of things about race and class,” Luesse said.

The fictional Alabama town of Glory, in which “Missing Isaac” was set, is loosely based on the Harpersville area. Luesse said she included references to local landmarks, as well as nearby cities like Childersburg and Sylacauga.

“It’s kind of a fictionalized version of the area where I grew up,” Luesse said.

She also said she originally did not intend for “Missing Isaac” to have Christian themes or to be written for profit. Her main focus while writing “Missing Isaac,” was to create genuine, believable characters.

“All I really wanted to do was to tell a good story,” Luesse said.

Luesse currently lives in Birmingham and is a Senior Travel Editor for “Southern Living” magazine.