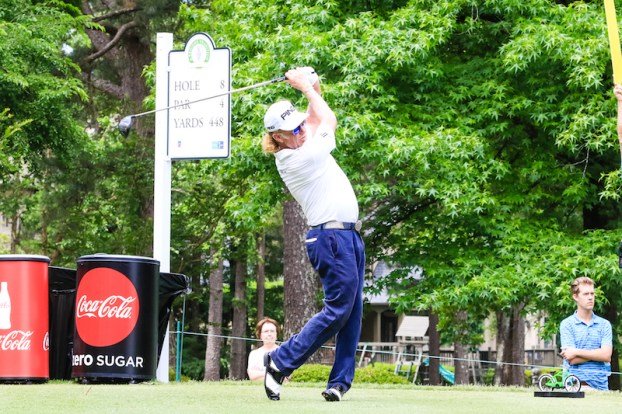 Miguel Angel Jimenez shares the 36-hole lead at 11-under with Gene Sauers at the 2018 Regions Tradition. The two players are two shots clear of a crowded leaderboard featuring 27 players within six shots of the lead. (For the Reporter/Dawn Harrison)

HOOVER – The weekend is set for the 76-player field at the 2018 Regions Tradition as 12 players are within four shots of the lead held by Miguel Angel Jimenez and Gene Sauers at the end of round two of the PGA Tour Champions first major of the season.

A total of 19 are within five shots and 23 are within six shots after several more went low to climb up the leader board during round two of the tournament on Friday, May 18, at Greystone Golf and Country Club.

Starting at the top, Jimenez and Sauers both had impressive follow ups to solid first rounds of the tournament.

Jimenez, who was one shot from breaking the course record during round one, followed up his 8-under 64 with a 3-under 69 to move to 11-under par heading into the weekend.

“I’m hitting very well,” Jimenez said. “I make a 3-under par today, obviously not as good as yesterday but happy with the round. I played good. I make only one bogey today, one bogey on hole No. 3 where with my 3-wood I missed the fairway, and then I hit it in the bunker and make a bogey there, but my game is good.”

Jimenez’s 11-under par lead is one he shares with Sauers, who shot a round of 5-under par 67, which he couldn’t have been happier with.

“I’m trying to be relaxed and happy right now,” Sauers said with a smile on his face. “I’m just going to try and breath a lot, keep the nerves away, just hit one shot at a time and see what happens.”

A big reason for Sauers’ success on day two was his hot start to the round. He was 4-under through seven holes birdying three of his first four holes, including the difficult par-4 third hole.

“I got off to a hot start,” he said. “I birdied one, hit it in there about two feet, then I chipped in on the third hole out of the bunker, which kept me going.”

The two golfers on top hold the lead by two shots over three different players including Scott McCarron, who shot a 4-under 68 to get to 9-under, as well as Kevin Sutherland, who shot one of the low rounds of the day at 6-under, and Jerry Kelly, who was 3-under for his round.

“Right now I’m in the mix,” McCarron said. “I just need to keep making birdies and eliminate mistakes. I made three bogeys today and one yesterday. That’s four bogeys, which is too many out here to compete and be at the top. All-in-all, it was a pretty solid day though.”

Behind that group at 9-under, is a group of three players at 8-under including Joe Durant, Scott Dunlap and Bob Estes. Dunlap and Estes both shot rounds of 6-under to get into the mix.

At 7-under is an even larger group of six players, including some big names. Stephen Ames, Steve Stricker, Tom Lehman, Kenny Perry, Tim Petrovic and Bart Bryant are all at that number and still in the tournament trailing by just four shots.

Stricker, who was 5-under in round one, felt as if he could have and should have been lower in round two after grinding out a round of 2-under 70 in the second round.

“It was a bit of a struggle at times I guess,” Stricker said. “I made a couple of good saves, but missed some putts I should’ve made.”

He knows that has left him with some ground to make up over the weekend if he wants to win his third PGA Tour Champions tournament of the season and his first major championship.

“I’m going to have to get a good round in tomorrow or Sunday or both days,” Stricker said. “The scoring is good here. You have to be on your game and you have to be able to get the ball in the hole.”

As for the idea of where the winner will need to be come Sunday, Jimenez said he expects that he’ll have to get to at least 20 under.

The good news for those trailing right now, is that last year’s winner Bernhard Langer trailed leader Fred Funk (-12) by six strokes entering the weekend, before he fired off rounds of 66 and 64 over the weekend. The two-time defending champ is a little further back this year at 2-under heading into the weekend trailing by nine strokes.

With a total of 27 players within six shots of the lead, fans coming out over the final two days should expect some fireworks.