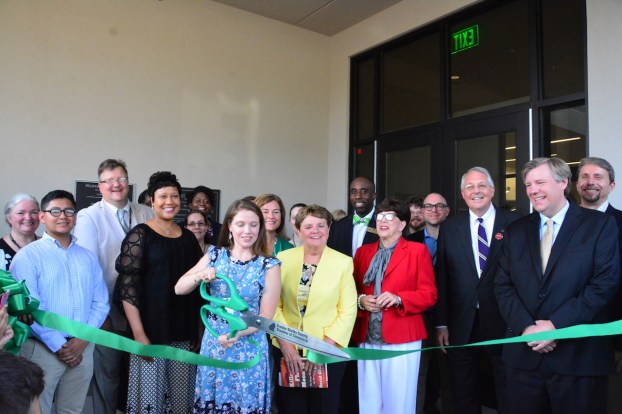 PELHAM – The skeptics were silenced on Thursday, May 17, when roughly 600 Pelham residents showed for the grand opening of the Pelham Public Library.

When efforts first began 10 years ago to raise money for the construction of a library, many were against the idea. It was the foresight of people such as former library director Barbara Roberts, former councilman Bill Meadows and Beth Meadows, the library guild’s first president, who helped get the ball rolling.

“They are the unsung heroes because they planted the seed when it was very unpopular,” said City Councilman Maurice Mercer. “They passed the baton on to Mary (Campbell) and Debbie (Parrott) and they took it and ran with it. The council believed in the vision and brought it to the city center.”

“It’s been a long time coming,” said City Councilwoman Mildred Lanier. “I encourage everyone to come out and see it.”

“Libraries have transformed,” he said. “It’s such a different space than what people knew when they were in school. There are Maker Spaces and meeting and study rooms – it was built to be interactive and to bring people together.”

Councilwoman Beth McMillan said with the library now open, in addition to the rec center and the walking trails, there’s something in Pelham City Park for everyone in the family to enjoy.

“Families can come spend an afternoon here and everyone can have something different that interests them,” she said. “I really think our middle school kids will really benefit from having the library so close by.”

The turnout for the event was perhaps much better than expected. Residents spilled down the sidewalk leading to the library’s front door, onto the grass and into the streets – everyone eager to step inside the more than 20,000 square-foot building.

“It was once said that the library is a medicine chest for the soul,” Mercer said. “People can come here to get away from any ailments they might have and just get lost in a good book.”

Whereas the old library had a limited amount of space, the new one has a lot of it. The children’s area is complete with green light fixtures that mimic the look of tree canopys, a play area and reading nooks built into the walls.

The teens section includes a gaming area and the Maker Space is ideal for collaborative group projects. Upstairs, the study rooms offer a quiet place to focus and seating underneath the staircase welcomes people to relax for a bit.

Campbell thanked the library staff and the Pelham Library Guild for their hard work leading up to the opening of the facility. She also thanked the architects from Goodwyn, Mills and Cawood for designing the facility and her husband Michael and son Jay for “putting up with the chaos” and for volunteering their time to help set up the library.

PELHAM – The missing African Serval cat that was reported missing on April 24 has been found and returned to... read more