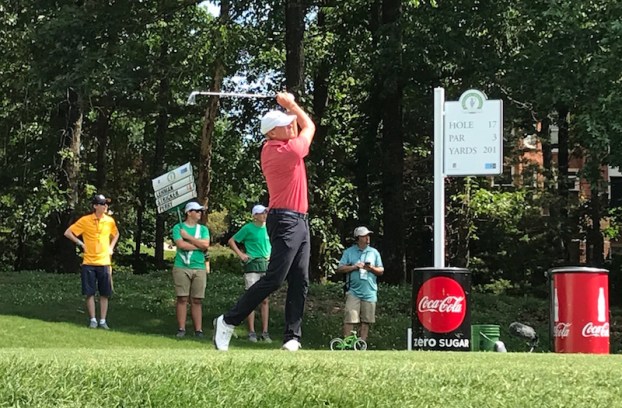 Steve Stricker shot a 7-under par 65 on moving day, which was the lowest round of the day. He's in solo second and three shots off of Miguel Angel Jimenez's record-breaking lead. (Reporter photo/Alec Etheredge)

HOOVER – While Miguel Angel Jimenez continued to play lights out on moving day at the Regions Tradition on Saturday, May 19, Steve Stricker made his move by jumping up seven spots to pull into solo second and earn a spot in the final pairing for Sunday’s final round.

Stricker, who holds the current PGA Tour Champions longest active streaks of 28 consecutive rounds of par or better, went out and shot a 7-under 65 to pull within three shots of Jimenez’s lead.

After Friday’s round of 2-under 70, Stricker said he had to get in a good round on Saturday or Sunday or both, which made him pleased when he accomplished that on Saturday.

“Very happy,” Stricker said. “I gave myself a chance going into tomorrow. I needed a round like this, because if I didn’t shoot this, I would be six or seven or eight shots back, so it would be hard to make up tomorrow. Now it looks like I will be two or three back, so I’ve got a chance.”

The biggest reason for Stricker’s low-round of the day came at hole number eight where he holed a nine iron from 150 yards out for an Eagle. He was 1-under for the day to that point, but that sparked a stretch where he went 5-under over the next six holes after birdying nine, 11 and 13.

“That two-hole stretch (eight and nine) really got my momentum going,” Stricker said. “I made the turn in 4 under instead of maybe 2 or something like that. So it really got me going on the back side, and played well on the back, too.”

He went on to par the next four holes in a row after several putts rolled just over the edge of the cup, but on 18 he finally got a tap in for birdie to move to 14 under for the tournament after hitting a nice second shot into the green on the par 5.

Stricker, who has two wins and four top-10 finishes in his four starts on the tour so far this year, feels good about his chances going into the final round.

“Well, I mean, we still have one more day to go, but I gave myself a chance for tomorrow and that’s kind of what I was looking to do today, is to put up a good number and get myself into contention for tomorrow,” he said.

He did get himself into contention heading into the final round, but Jimenez is going to be a tough player to catch after firing his third consecutive round in the 60s to break the 54-hole scoring record with a total of 17-under 199 through three rounds after shooting a 66 on Saturday.

“I have been hitting the ball nice,” he said. “Missed a couple shots around there, but all-in-all, I hit it very solid from the tee. I think everything is right in place.”

Known as “The most interesting man in golf,” Jimenez has been laid back and relaxed all week and his demeanor hasn’t changed as he sleeps on the lead.

“You cannot beat this,” he said. “Look at our office. Beautiful sunshine, nice grass, nice golf course, nice people around, you know. You can’t beat this really. I enjoy it, you know. I always tend to enjoy myself on the golf course. That’s the main thing, that you are happy.”

As for sleeping on the lead, he’s not too worried.

One shot behind Stricker is a group of three players at 13-under par including Joe Durant, Kevin Sutherland and Gene Sauers, but they are three shots clear of six players sitting at 10-under. For any of those guys to have a chance, it will take Jimenez struggling and them going extremely low on Sunday.

By BRANDON SUMRALL | For the Reporter The Calera Eagles varsity football team put an exclamation point on the end... read more