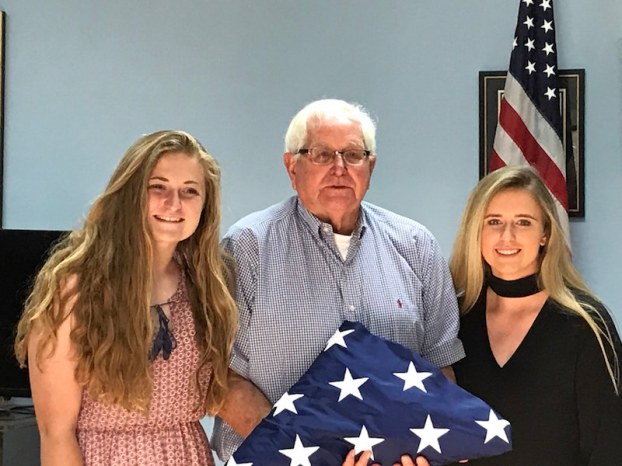 A new flag for Harpersville

On the evening of a regular Council meeting, May 7, students from the Coosa Valley Academy donated a size appropriate new flag to the Town of Harpersville. Tayler Forstmann and Alli Tate represented the 29 members of the senior class as they presented the folded flag to Mayor Greene and the Council members.

All smiles, Greene gladly accepted the flag on behalf of the Council and cheerfully announced to everyone in attendance, “This gift from the students to the town is exciting.”  As he stood by the students for a photo he said, “We will proudly hoist it up the pole tomorrow morning.”

The mayor later explained that the flag pole had been in front of Town Hall for years, but over time the rope had deteriorated and the town did not have the proper equipment to get all the way to the top of the pole to fix it.

“It’s a good example of how people help people,” Greene said. “One of the contractors on another project came through and learned about our flag pole issue and offered to help,” he said.  The next thing I knew we had a rope and a flag hanging out there.  “It was an older flag and a bit small but it was a flag,” he explained.

Mayor Greene is a former Chairman of Coosa Valley Academy and has watched the students there grow up.  Reportedly he was visiting one day and the students mentioned they were ordering a new flag for the school and he told the story about the flag pole getting fixed at Town Hall.

When asked what inspired them to bring a new flag to the Town, “The Senior Class wanted to do something,” said Tayler Forstmann.  Alli Tate smiled and said, “We have grown up here and one day we went by and noticed the small flag, so we pitched in.”

At a time when graduation is approaching and the anticipation of summer fun and the new adventures of college are swirling around, it is refreshing that students stopped to think about a meaningful legacy.  How appropriate that a gift of the American flag occurs during the month that we will observe Memorial Day, a holiday set aside to remember American soldiers who lost their lives in military service.  How appropriate that it was affectionately given to a Veteran.

Hats off to the Senior Class of Coosa Valley Academy for a reminder of how lucky we are to live in Shelby County and in the United States of America!  God Bless the Class of 2018.