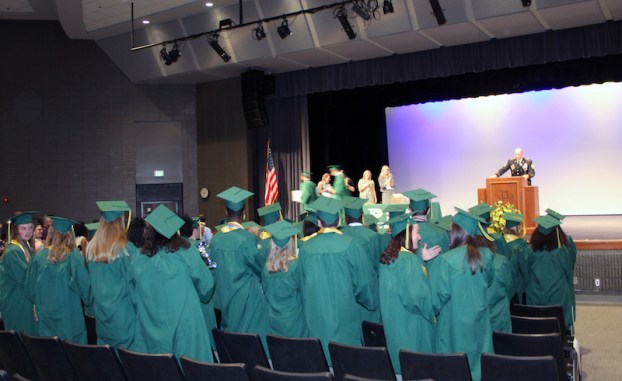 The Pelham High School Class of '18 celebrated awards night in caps and gowns this year. (Contributed)

“Awards Night begins at 6:00 in the auditorium,” said Pelham High School Senior Class Sponsor Karen Varner. Varner shared that the seniors would be wearing their caps and gowns for the occasion and that the program had been streamlined.

Original news of the streamlining indicated that Awards Night would wrap up in one hour. What a joy to report that there were so many awards and scholarships to distribute that, while the ceremony did progress at a steady pace, it actually continued for over an hour-and-a-half. With newly originated and returning scholarships, military awards, college and university scholarships, along with senior and underclassmen recognition, PHS has much to celebrate.

One new scholarship is the Ollie B. Owens Animal Welfare Scholarship given by Lee Owens.

“I hope to continue this scholarship as long as I possibly can—and grow the scholarship as well,” said Owens. Jamie and Jessie Abbott received the charter Ollie B. Owens Scholarships.

The Tyler Plemons Scholarship was awarded to Hannah Norris.

Caps and gowns cast Awards Night as a more formal occasion. As underclassmen receiving awards took note of the many senior scholarships, perhaps they were creating future goals for themselves. As the class of 2018 prepares to graduate, their hard work creates their future success.

By CONNIE NOLEN / Community Columnist “The national judges were very strict this year as you can see from the... read more