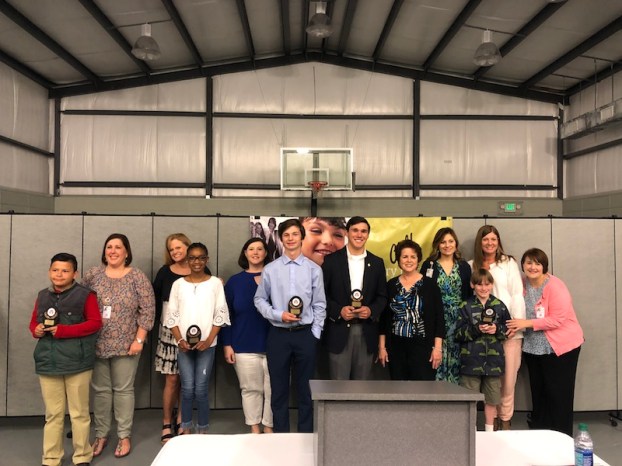 Students representing five Chelsea schools were honored for their upstanding character at the recent Character in Action ceremony. (Contributed)

ALABASTER – Five students from Chelsea schools were recently recognized by the Shelby County Drug Free Coalition at its Character in Action Awards ceremony at the Family Connection headquarters in Alabaster.

Each student was nominated by school personnel, and was chosen by how he or she regularly displays the character traits of respect, self-discipline, responsibility, citizenship, friendship, fairness, perseverance and courage.

Chelsea Park Elementary School student Cesar Castillo received the award and was commended for his courage, self-discipline and respect. Castillo is the son of Cesar Castillo Morales and Rita Pena.

“Cesar shows respect by listening to others talk about their problems during guidance lessons. He models empathy to all and exemplifies all of the Seven Habits (of Highly Effective People),” his nomination form read. “Cesar is kind to all students. He uses self-control in every situation. He does not allow the actions of others to change his positive reactions.”

Forest Oaks Elementary School student Addison Foster received the award based on her friendship, perseverance and self-discipline. Foster is the daughter of Alan and Alma Foster.

“Addison is a great friend to everyone. That is a huge accomplishment for a fifth-grade girl. She is kind to everyone, no matter whose class she is in, if they are popular or not, if they play sports or not, if their family is privileged or not, if they receive special school services or not,” her nomination form read. “She is precious and always a kind and sweet friend. I have seen her comfort friends who are upset, encourage friends when they need an extra smile and show kindness to everyone.”

Jacoby Gulledge of Mt Laurel Elementary School was honored for his respect, fairness and perseverance. Gulledge is the son of John Earl and Jerri Ann Pippen.

“Jacoby treats everyone fairly. He is the friend who will give up his turn in a game so someone else can be happy. He is also the one who is willing to play with anyone who asks,” his nomination read. “Sweet Jacoby never gives up. Although he may have to practice a skill several times before he gets it, he always does his best and never gives up before the skill is mastered.”

Representing Chelsea Middle School was Holden Leithauser, who was praised for his perseverance, responsibility and courage. Leithauser is the son of Don and Julie Leithauser.

“Holden is honest and trustworthy as a student. He is who I list for my class to send roll to the office and run errands. He accepts responsibility for any failures that he receives and resolves to do better,” his nomination read. “For example, when he recently scored a low grade on a test, he was in my room first thing the next morning, not asking for a retake or a redo, but how to get better for the next unit. This shows a growth mindset and his own sense of responsibility.”

Chelsea High School was represented through Kadin Christian, who was noted for his perseverance, citizenship and fairness. Christian is the son of Henry and Angela Christian.

“Kadin gets along with everyone. Even though Kadin is a leader and is very smart, he is always willing to listen to other people’s opinions and ideas,” his nomination read. “Kadin is an outstanding student, academically and behaviorally. He has been nominated for Student of the Month for his grade by his teachers each year in high school. He is currently in the top 10 percent of his class, he has over a 4.0 GPA and takes honors and AP classes.”