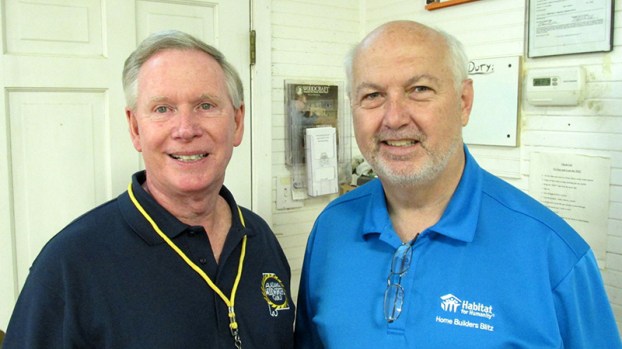 MAYLENE – The Alabama Woodworkers Guild, with nearly 300 members, celebrated its 10th anniversary in Maylene on Saturday with presentations, music and food.

Though the guild was founded in 1983, members occupied the former Maylene School in 2008 and recommissioned it the Woodworking Education Center.

“This is a great building for us,” said shop manager Patrick Bush of Alabaster. “It was built around 1900 or so, and in addition to being an elementary school, it was a community center for movies and dances, a skating rink and a storage facility for Habitat for Humanity.”

The building’s acquisition was spearheaded by Mayor Charles Moore of Irondale who is also president and CEO of Habitat for Humanity Greater Birmingham.

Moore said he knew members of the guild and believed the building, leased by Habitat, could be a good home for them. In return, guild members build kitchen and bathroom cabinetry for Habitat’s “Home for the Holidays” project every December. The mayor explained this is an annual “quick build” the local chapter sponsors.

Bush said his job is to buy and repair equipment, purchase supplies and teach woodworking classes.

“We have major equipment, hand tools, specialty devices and forms,” Bush said. “Some of our equipment is from the 1800s and originally ran on steam or water wheels. Now we have equipment using lasers, so we have it all.”

In addition to equipment, Bush said the guild has a cafeteria and classroom where safety is the first lesson.

“As soon as we get new members, we get them in class as quickly as possible,” he said. “Safety is always our priority.”

Bush said guild members make things for themselves and their families, sell some of their product but give much of it away. The group’s motto is “Making sawdust with a purpose.”

But, Bush insisted, the guild’s greatest asset is people.

“We have specialized talent in our group, and great camaraderie,” he said. “Members can come and learn from experts. For example, we have a hand tool group meeting on Thursdays, a scroll saw group, a wood turning group, a toy-making group meeting on Tuesdays and a stringed instrument group, known as luthiers. Everyone who comes here learns from other members and shares their expertise in return.”

Van Phillips of Hoover is leader of the luthiers. He said he’s been making stringed instruments for 18 years.

“We make guitars, and we’ve made some mandolins,” he said. “The mandolin work is meticulous since some parts are measured in tiny fractions of an inch. We learn from each other, and we fix one another’s mistakes!”

The toy-making group produces some 20,000 toys each year for the Birmingham Children’s Hospital and other groups–many of the toys helping children in rehabilitation. Habitat often donates left-over wood for toy-making. The guild has also built furniture for the Alabama Sheriffs’ Boys Ranch, the Greater Birmingham Ministries and other charities.

Board president Don Wilson of Greystone said the American Village in Montevallo has also come to the guild to have authentically-designed period pieces for their facility.

“If we have an honorary member, it’s Charles Moore,” Wilson said. “And today we make him a lifetime member.”

Wilson presented Moore with a lifetime member plaque, joking that the guild in the future would always have at least one member.

In response, Moore said Habitat was proud to be a partner to the guild.

“Habitat for Humanity Greater Birmingham includes four counties: Shelby, Jefferson, Walker and St. Clair,” he said. “We had this building way down in Shelby County that we were underutilizing. Now it’s a great place for woodworking education and charitable endeavors. I’m proud to be associated with this wonderful group.”