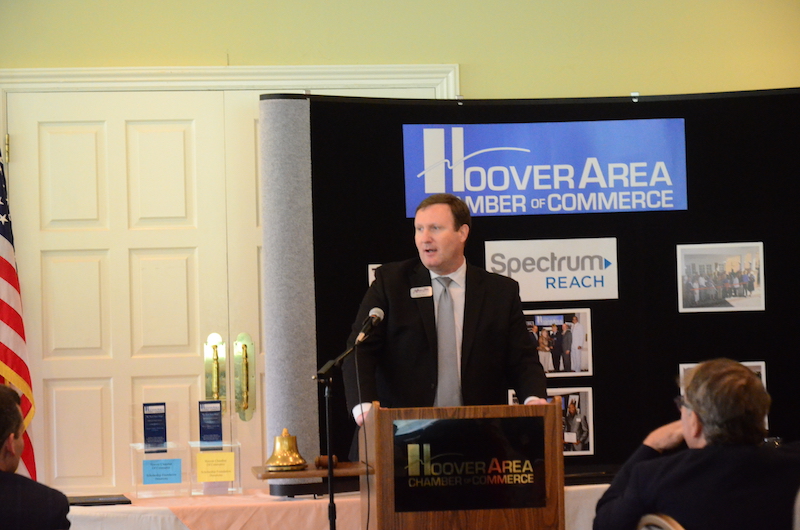 Jeff State Community College Community and Media Relations Director and Shelby County Board of Education member David Bobo discusses the importance of graduating students planning for future careers and the alternatives to attending a four-year university at a May 17 Hoover Chamber luncheon. (Reporter photo/Amalia Kortright)

HOOVER – Members and guests of the Hoover Area Chamber of Commerce heard a presentation about career preparation and planning in youth from Jefferson State Community College Community and Media Relations Director and Shelby County Board of Education member David Bobo at a luncheon on Thursday, May 17.

Bobo began by addressing the importance of high school students making good decisions “in every way.”

“I heard someone say one time, and he works with at-risk youth, that all youth are at risk, and I believe that,” Bobo said. “You can be tracking right along, but you can get off track and you can make some bad decisions.”

Bobo said one of the bad decisions that many graduating high school students make is taking student loans and attending college without plans for a future career.

Bobo said every student is unique and thrives under different environments, situations and career paths.

“One of the worst things I hear, sometimes, is that parent who says, ‘You’re going to get that four-year’ degree,'” Bobo said. “Well, that’s great for some. For some, it’s not. It’s just not a great fit for everybody.”

Bobo said Jeff State offers many options to anyone who is not quite sure what they want to do with their career or needs to save money before attending a four-year university. He said certain programs have a high job placement rate and a diverse population of students.

According to Bobo, students who have attend Jeff State for two years have a higher average GPA than those who have attended a regular university for two years and pay almost half the tuition of regular college classes. He also said Jeff State offers dual-enrollment, which allows high school students to complete up to a year’s worth of college classes before graduating.

“We talk about workforce development every day. That is something Jeff State and Hoover Schools are working toward,” Bobo said. “We’re providing education for those jobs.”