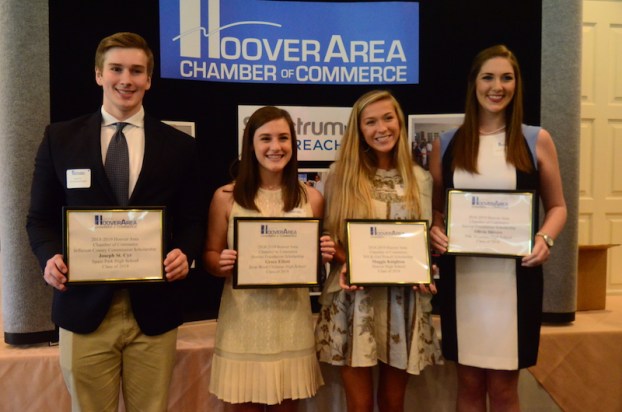 Four graduating seniors representing four high schools in Hoover received a combined total $16,000 in scholarships during the May 17 Hoover Chamber luncheon. Each student holds over a 3.8 GPA. (Reporter photo/Amalia Kortright)

HOOVER – The Hoover Area Chamber of Commerce awarded four high school seniors with scholarships at its membership luncheon on Thursday, May 17, at the Hoover Country Club.

Hoover Chamber scholarship committee member and Wrapsody co-founder Terry Shea said the scholarships benefit students who are employees of businesses associated with the Chamber or the children of Chamber business owners who plan to attend college in Alabama each year.

“On a very personal note, this scholarship is my very favorite initiative that the Hoover Chamber of Commerce supports,” Shea said. “It is the way they give back to their membership.”

Shea said the Hoover Chamber gave a total of $16,000 in scholarships in 2018, with each student receiving $4,000. Shea said the scholarships are made possible by the contributions of many chamber members who are invested in Hoover’s future.

“Seniors, I want you to look around this room, because these members that are in this room today are a much greater part of the larger membership that made these scholarships possible,” Shea said. “So, when you’re out shopping, and dining and having fun, look for the Hoover Chamber of Commerce member sign, and that’s usually posted in the window, and know that member believes in you and also believes in Hoover.”

The Bill and Dr. Gail Powell scholarship was presented to Hoover High School student Maggie Knighton, who plans to attend Auburn University this fall and major in accounting.

Hoover Chamber Second Vice President Paul Dangel said she holds a 3.9 GPA, has been a member of the National Honor Society for three years, is a senior class officer, has spent three years in Spanish Honor Society and was voted as friendliest in her class. Additionally, Dangel said Knighton has already invented an award-winning product that attaches and umbrella to a shopping cart.

“This young lady openly admitted to struggling with rhotacism. Google defines it as difficulty in pronouncing the letter R. She used that opportunity, from second to sixth grade, to take speech therapy and it has helped her set her new goal. With her major in accounting, her ultimate goal is to graduate Auburn and open an audiology clinic right here in Hoover.”

On behalf of the Jefferson County Commission, Spain Park High School senior Joseph St. Cyr was awarded a scholarship to Auburn, where he plans to enter the school’s pharmacy program.

Shea said St. Cyr currently holds a 4.39 GPA and an ACT score of 32, and is a member of SPHS’s Health Science Academy, co-captain of the basketball team, is a senior class officer and a member of “pretty much every honor society that you can think of.” Additionally, Shea said St. Cyr lost about 70 pounds and discovered a new passion for nutrition.

“In his own words: ‘I intend to use my knowledge to conduct my own research on nutritional ingredients that are beneficial to athletes and create my own business selling high quality, safe, nutritional supplements’,” Shea said.

“The goal is important to her as her grandmother passed away from skin cancer in 2009, and with degrees, she wants to ensure that she can assist other families with prevention and cures so they don’t lose loved ones,” Dangel said.

Shea said Shivers currently holds a 4.4 GPA, an ACT score of 33 and ranks 12th in her class. Additionally, Shea said she is a national ambassador and a member of the National Honor Society, Science Honor Society and Rho Kappa.

“In her own words: ‘I feel a great responsibility to help others, and I believe that these careers will provide me with the resources needed to aid those in need in ways that other careers would not. I want to use the knowledge gained at UAB to help others with their medical needs, both professionally and as a means to serve in the community,'” Shea said.

Hoover Chamber Executive Director April Stone said she was excited to see what potential members of Hoover’s future workforce will accomplish with the scholarships.

“Our hope is that they venture out into the world and come back to Hoover to become a part of our dynamic business community,” Stone said.