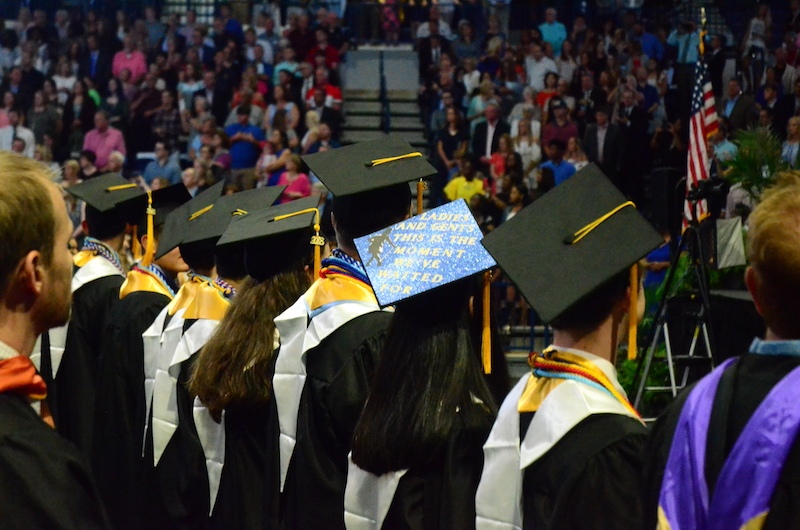 Almost 400 seniors graduated from SPHS during a May 23 commencement ceremony at the Pete Hanna Center at Samford University. (Reporter photo/Amalia Kortright)

BIRMINGHAM – Graduates from Spain Park High School were encouraged to reflect on their past seven years as a student body before receiving their diplomas at the Pete Hanna Center at Samford University on Wednesday, May 23.

Graduates Tanya Gupta and Woody Shin were selected out of the school’s valedictorians to give speeches.

“Every person here has endured his or her fair share of bad days. Yet, had it not been for our struggles, you wouldn’t be the amazing person you are today,” Gupta said. “It is fair to say that life has, and always will, throw us curveballs. However, Spain Park has taught us all one thing, that I advise everyone to remember as we tackle new endeavors in our lives. It is solely up to us on how we take life’s challenges.”

For the first homecoming dance to the last pep rally, Gupta said the memories made at SPHS will stay with the class of 2018 forever.

“We were able to shape each other and ourselves with the utmost support and love for Spain Park and its faculty,” Gupta said. “Tonight, all those all-nighters, Panera study sessions and a.m. cram sessions become worth it. Class of 2018, we earned our futures.”

Shin began his speech by saying that he was inspired by every one of his classmates. Both academically and athletically, Shin said the class of 2018 has left a lasting legacy.

“I know that this class will not soon be forgotten within the walls of Spain Park High School. However, the thing that will stick with me the most about all of you is not any statistic or championship. It’s the support, friendship and compassion that you all have showed me over the past four years,” Shin said.

Shin said he could not thank his fellow graduates enough for making SPHS feel like a second home to him and countless others.

“I see an entire class united under a shared love for the place we hold so dear. I see us, class of 2018, in all of our wildly imperfect, yet awe inspiring glory,” Shin said. “At my elementary school graduation, I remember someone saying that it takes a village to raise a child. That saying has stuck with me for seven years. And now, looking back, I see more clearly than ever the village that has raised me.”

Senior class president Brady Harp said trying to encompass all the different aspects of the class was a difficult task.

“Spain Park has made us into the people we are today, through teachers, assignments and each other, we found ourselves,” Harp said. “We’re not just high school graduates. We’re friends, we’re family and we’re Jaguars forever.”

Principal Larry Giangrosso said began his remarks by saying that students at SPHS have had the privilege or a first-class education, and recognized administrators from all of the elementary and middle schools that feed into SPHS.

Once each graduate receives their diploma, Giangrosso said, the expectations for their lives will change. According to Giangrosso, each student will be asked to complete three important tasks.

Firstly, Giangrosso said society will ask each graduate to advocate for themselves.

“No longer will our society expect, and in many cases, allow your parents or anyone else to be your advocate,” Giangrosso said. “It will be up to you to make the decisions, the choices, and to live with the outcome.”

Secondly, Giangrosso said graduates will be asked to try and solve the problems that previous generations were unable to.

Lastly, Giangrosso said each graduate will be responsible to give upcoming generationS the tools, moral integrity, work ethic and education needed to solve the problems of today.