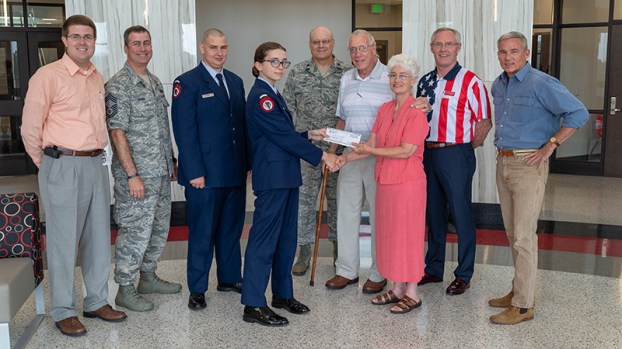 Thompson High School Junior ROTC cadets present Jim and Jennifer Butler with a $1,500 check to help cover the production of a bust in their son, James Michael Butler’s, honor during a May 23 ceremony at the school. (Reporter Photo/Neal Wagner)

ALABASTER – When Thompson High School Air Force Junior ROTC cadet Christian Godfrey and 24 of his fellow cadets were braving an unseasonably cold night during their fourth Memorial Bataan Death March hike on April 20, they took comfort in knowing their actions were for a good cause.

During the march from April 20-21, the cadets hiked nine miles the first day and six miles the second day and camped at Oak Mountain State Park overnight to honor the memories of the Americans who lost their lives in during the Bataan Death March.

This year, the event also helped to honor a memory a little closer to home.

The Junior ROTC cadets sought donations to support their march, and were able to collect more than $1,500 from area donors. On May 23, the donations found a home, when the cadets presented U.S. Navy veteran Mark Davis, who founded the Alabama Fallen Warriors Project, with a check during a ceremony in the THS rotunda.

“The overnight part was the hardest, because it got cold,” Godfrey said after the check presentation. “But this feels great. Being here today makes me want to do it again next year.”

Davis will use the donation from the Junior ROTC to help fund the production of a bust honoring THS alumni James Michel Butler, who died in 2011 in a vehicle crash while awaiting deployment at Fort Hood, Texas.

Butler left a lengthy legacy of service to his country, including time as a federal air marshal, a border patrol agent and a Shelby County Sheriff’s Office deputy. While serving with the U.S. Navy, Butler earned the air assault badge and parachutist badge, and served in the 20th Special Forces Group in support of Operation Enduring Freedom.

Davis said the donation from the THS Junior ROTC is the first the Fallen Warriors Project has received from an ROTC group, and nearly brings the Butler bust project to the $5,000 threshold it needs to begin. In total, the bust will cost about $11,000.

James Michael Butler’s parents, Jim and Jennifer, attended the check presentation, as did Col. Lee Busby, who will sculpt the bust out of clay before the model is used to create the final product. The Butlers said they have not yet finalized the location of the bust, but said they would like to place it somewhere at the new THS.

“I can’t believe this. This is fantastic, and I thank y’all,” Jim Butler told the Junior ROTC cadets. “This is such an honor.”

To donate to the project, contact Davis at 266-0632 or email markd@veriphase.net.