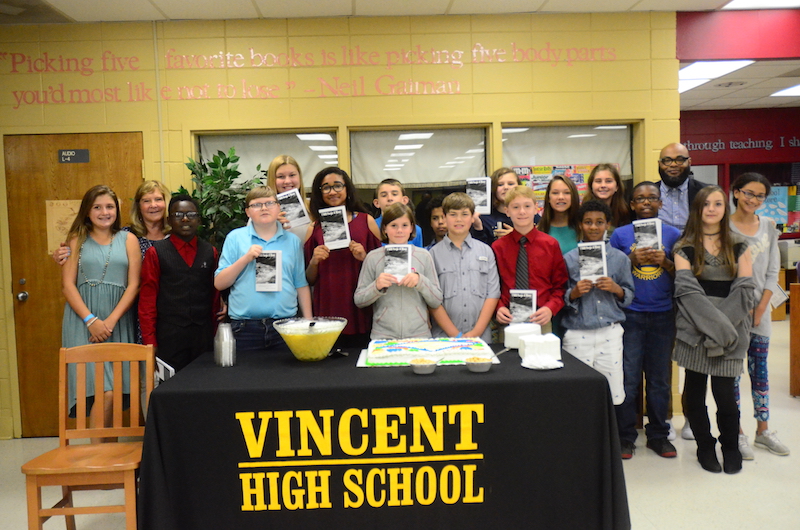 A total of 18 VMHS sixth graders had poems published in the school's first poetry anthology book, "I Will Forge a River," and celebrated with an assembly and reception on May 18. (Reporter photo/Amalia Kortright

VINCENT – Sixth graders at Vincent Middle High School celebrated a unique accomplishment during an assembly on Friday, May 18.

Through the Shelby County Arts Council’s Writing Our Stories, the work of 18 VMHS students was published in the school’s first poetry anthology book, “I Will Forge a River.”

During the assembly, each student included in “I Will Forge a River,” read one of the poems they had written aloud to other middle school students and attended a small reception afterwards.

According to SCAC Executive Director Bruce Andrews, this is the first time the Writing Our Stories program has been held at VMHS.

“We were looking for schools with a higher at-risk population,” Andrews said.

In his forward at the beginning of the book, Andrews described the Writing Our Stories program as a collaborative effort between the SCAC and the Alabama Writers’ Forum, and it takes the hard work of many to get it launched at each school.

“Programs like this don’t just happen. They have to be founded, funded and fine-tuned.” Andrews wrote. “This program is indeed a jewel.”

Andrews said VMHS English teacher Jo Leigh Harlow was an integral part of installing the Writing Our Stories program at the school.

“In every school, we have to have an innovative and receptive teacher to act as a host,” Andrews said. “(Harlow) was excited from the get go.”

Harlow said she worked with students for almost a year to develop their poetic skills. She said the program gave students a love of writing and a love of poetry, as well as honed their public speaking skills.

“They were able to write creatively and use words appropriately. It also had them seeing what to do to publish a book,” Harlow said. “They loved it. They have been so excited about putting a book together.”