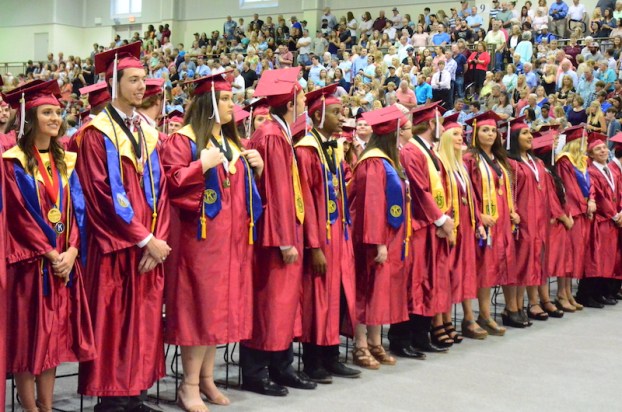 More than 100 seniors from SCHS received their diplomas at the school's May 24 graduation ceremony. Graduates earned a total of $3,450,640 in scholarships. (Reporter photo/Amalia Kortright)

MONTEVALLO – A total of 123 Shelby County High School seniors celebrated the end of their high school careers at a graduation ceremony at the University of Montevallo McChesney Student Activity Center on the evening of Thursday, May 24.

Principal Barbara Snyder said each student who walked across the stage and received their diploma is part of the 104th class to graduate from SCHS. The SCHS class of 2018 also earned more than $3 million in scholarships.

In senior class treasurer and current Miss SCHS Ambry Martin’s welcoming remarks, she thanked the families and friends of each graduate who came out to celebrate with them.

“Without your thoughts, prayers and words of encouragement, we would not be here tonight,” Martin said. “Our high school journey officially ends, and we turn the page to reveal a new chapter of our lives. Without your support, none of this would be even possible, and we’re eternally grateful that we get to share this great moment with you.”

SGA Executive Vice President Joci Smith, who shared the ceremony’s inspirational thought, quoted author J. K. Rowling: “It is impossible to live without failing at something, unless you live so cautiously that you might as well not have lived at all. In which, you have failed by default.”

Morris began his valedictory address by discussing the resources and skills he has gained through his time at SCHS.

“I’ve been given the ability to think critically about an issue, have a fresh mind when approaching a problem and logical reasoning through an original situation,” Morris said.

However, Morris said one skill he developed in high school stands above the rest: procrastination.

“In all honesty, procrastination isn’t all that bad. When you procrastinate, you set aside an overarching task for more enjoyable ones, more applicable ones. I’m sure you’ve heard the popular quote, ‘life is about the journey, not the destination.’ This is exactly what I’m talking about,” Morris said. “Sure, it’s important to complete the task, to reach the overarching goal, but along the way, that’s where you find what’s meaningful.”

Morris asked graduates, parents, friends and faculty to recognize the importance of procrastination in order to understand that life is not about reaching the end.

“If you spend your entire life focused on the goal, and fail to enjoy the journey along the way, you will have lived a short and unsatisfying life,” Morris said. “But, if you take your time and smell the roses and take the scenic route, you’ll become your own individual and find the journey worthwhile.”

At the conclusion of his speech, Morris said there is one thing that his fellow graduates should not procrastinate on.

“Don’t wait to thank those who helped you get here today. I know none of those could have gotten here today on our own, without someone,” Morris said. “You never know when you may or may not have the opportunity to do so again. So, feel free to procrastinate, just not on this.”