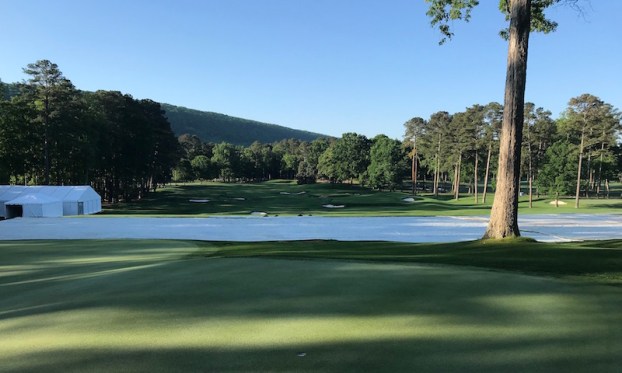 Shoal Creek is ready to host 156 of the best players in the world at the 73rd playing of the U.S. Women's Open from Thursday, May 31, through Sunday, June 3. (Reporter photo/Alec Etheredge)

NORTH SHELBY – Starting Monday, May 28, 156 of the world’s best women golfers will descend to Shoal Creek Golf and Country Club for the playing of the 73rd U.S. Women’s Open.

Tournament play will start on Thursday, May 31, and last through the weekend until a winner is crowned a national champion on Sunday afternoon.

It’s an event that Birmingham is not only lucky to call home for the 2018 golf season, but one that will see the stars of the LPGA look to win one of the most coveted trophies in all of golf.

It’s been a very balanced season so far on the LPGA Tour with a different player winning each of the 12 tournaments played so far in 2018, showing the competitive nature by which this tournament will be played.

The most recent winner on tour came from the fifth-ranked player in the world, Ariya Jutanugarn, who won her first tournament of the year by taking home the Kingsmill Championship.

Out of those four names, only Wie and Korda have won during the 2018 season so far.

With the LPGA seeing younger and younger golfers, people tend to forget how young Thompson, Wie and Korda are. The oldest of the three golfers is Wie at 28 years old, while Korda is 25 and Thompson is just 23, making them young exciting players to follow and watch at this year’s tournament.

Thompson, who is possibly the most popular person on the tour, started the season strong with two top six finishes, but her best finish since then was a tie for 12th at the HUGEL-JTBC LA Open.

Wie has been up and down as well this season, but has that lone win and has finished in the top 11 four times thus far in 2018.

Korda, however, has stormed onto the scene this season winning the first tournament of the year and finishing inside the top 10 in four of the seven tournaments she has played, including a fourth-place finish at the ANA Inspiration.

Those three players will be paired together for the first three rounds of the tournament with their first round starting at 7:46 a.m. on hole No. 10, Thursday, and at 1:26 p.m. on hole No. 1, Friday.

She has also yet to finish lower than 26th in any event, making her a strong contender to take home the Harton S. Semple Trophy.

The world’s No. 1 player, and possibly most consistent player, has arguably the best chance to bring home the championship. In seven events played, Inbee Park has won once, finished in the top 10 four times and in the top 25 five times.

Another story to follow will be Alabama’s own Emma Talley, who played collegiately at the University of Alabama, and calls Shoal Creek her home course.

Talley was able to qualify for the tournament by winning a playoff in a sectional qualifying tournament. She hasn’t had the most consistent or best season on the LPGA Tour, but the LPGA rookie does have a tie for fifth at the HUGEL-JTBC LA Open and a tie for seventh at the ISPS Handa Women’s Australian Open on her resume.

Sung Hyun Park, who is the defending champion, also has as good of a shot as any to bring home the title. The fourth-ranked player in the world, Park has one win this season, as well as two top 10 finishes and four top 25 finishes. Only two players since 1991 have successfully defended their title, Annika Sorenstam and Karrie Webb.

If you would like to make it out to see the biggest golf event Birmingham has hosted since the record-breaking 1990 PGA Championship at Shoal Creek, tickets are available at Uswomensopen.com

The first two tee times are scheduled for 6:40 a.m. with a two-tee start.

Below are some exciting groups to watch with their Thursday tee time followed by their Friday tee time with the starting hole for each day.