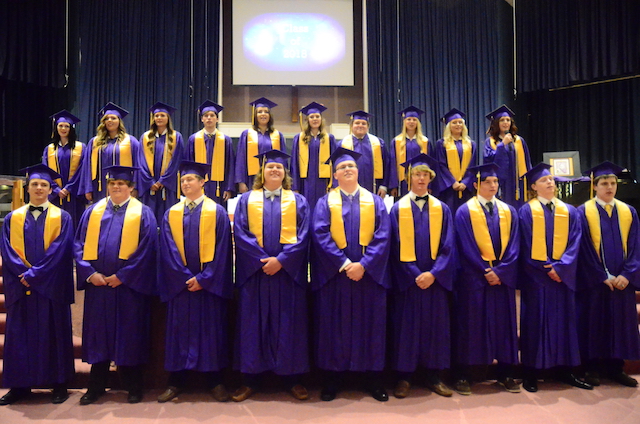 CHHS graduates sing the school's Alma Mater during a commencement ceremony on the evening of May 25. (Reporter photo/Amalia Kortright)

COLUMBIANA – Nineteen Cornerstone Christian School seniors celebrated the beginning of a new chapter of their lives at a graduation ceremony on Friday, May 25 at Bethel Baptist Church.

The commencement ceremony began with welcoming remarks and a prayer from CCS High School Principal Margaret Pickett. According to Pickett, God’s hand is evident in everything good that happens at CCS.

“He sends me the right people at the right time,” Pickett said. “This is God’s school. I just get to be the one to take credit for a lot of things. I give all credit for every good and perfect thing to the Lord.”

During her address, salutatorian Noelle Maxwell said life -changing things have occurred over the past few years at CCS.

“Whether we are headed straight into the workforce or off to college, we came to the school with individual dreams and aspirations,” Maxwell said. “Tonight, we are leaving with even bigger ambitions.”

Valedictorian Alex Smith began his address with a quote from author J.K. Rowling: “It is impossible to live without failing at something, unless you’ve lived so cautiously that you might as well not have lived at all. In which case, you have failed by default.”

Smith encouraged his fellow graduates to make the most of every opportunity they are given and to go out into the world and make it a better place.

“Most of us are looking to the future with some anticipation, and perhaps some apprehension. We are concerned about what to do with our lives,” Smith said. “Whether we go to college or enter a branch in the military, we must remember one thing. We can do work grudgingly, or we can do work gratefully.”

Lastly, Smith wished his fellow graduates success in all of their future endeavors.

“I know we have so much to offer the world, and I know we’re going to do great things,” Smith said. “I challenge each and every one of you to take risks. You never know what is around the corner.”

During his speech, Wright said students have to have the “three Fs” in order to pass the “test of life,” The “three Fs,” Wright said, include faith, foresight and fight. Wright referenced explorer Hernan Cortes and the Biblical story of Caleb, who led the Israelites to the Canaan.

“Caleb got to his mountain. Cortes took the treasure. Class of 2018, I think you can take it, too. This is what you’ve got to do: charge,” Wright said.

“Caleb was this kind of guy. He was so motivated. He had this vision. He stepped in to a land that was filled with milk and honey, and when they walked in,

Graduates Sophia Brough and Patrick Howell led their classmates in the ceremony’s parent tribute. Before they received their diplomas, each graduate brought flowers to family members in the audience as a token of appreciation.

“Whoever said that no man is self-made is someone who stopped to think about just how they were able to reach their goal,” Braugh said. “I’m speaking for the entire class when I say that none of us would be where they are today without the love and support from our parents.