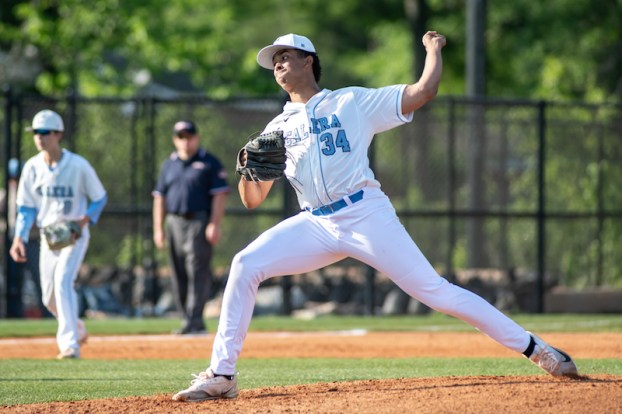 Jacob Smith, above, was named to the All-County First Team after another incredible season for Calera that saw him toss 102 strikeouts. (File)

Another baseball season for Shelby County is in the books and it was a special one that saw six teams advance to the playoffs, two advance to the quarterfinals and one finish as state runner-up.

None of that success would have been possible without standout talent. All of the best players from our 11 AHSAA schools is highlighted below with the 2018 edition of the All-County Team featuring a first team, a second team and honorable mentions.

Pitcher: Jacob Smith, senior, Calera. Smith’s dominant career has come to an end as he moves on from Calera and heads on to Vanderbilt. His unreal senior season featured a 9-0 record and an ERA of 0.65 with 102 strikeouts.

Pitcher: Landon Green, senior, Helena. Another future SEC star at Alabama, Green led the county with 108 strikeouts during his senior season and held an ERA of 1.26 in 77.1 innings pitched this season. He finished the season with a 12-1 record as the Huskies came within a game of repeating as Class 6A State Champs.

Pitcher: Richard Fitts, senior, Helena. Fitts didn’t get as much run support as Green and ended the season with a 6-5 record, but the future Auburn Tiger had 102 strikeouts and held an ERA of 1.68, while allowing just 20 walks in 74.2 innings.

Pitcher: Jackson Kimbrell, junior, Oak Mountain. Kimbrell’s ERA was the highest of anybody on the first team at 2.53, but the junior who is already committed to Ole Miss finished fourth in the county in strikeouts with 96. He also posted two shutouts on his way to a 6-3 record and allowed just 34 hits and 20 earned runs in 55.1 innings pitched.

Catcher: Robbie Albright, senior, Vincent. One of the easiest decisions to place on the first team, Albright led the county in hitting with a batting average of .500. He also posted 31 RBIs, three home runs, seven triples and 15 doubles to his resume. All of those hits led to him leading the county in that category with 52, while scoring a county-high 47 runs.

First Base: Wesley Helms, freshman, Briarwood. As a freshman for the Lions, Helms finished third in the county with 33 RBIs and held a batting average of .415. He added eight doubles and 19 runs scored this year and has a bright future at Briarwood.

Second Base: Carson Eddy, senior, Briarwood. As clutch as they come, Eddy batted .442 this season and had 32 RBIs thanks to two home runs, four triples and 11 doubles at the plate. He also scored a total of 26 runs.

Shortstop: Mitchell Rottier, senior, Pelham. Rottier has had a steady career with the Panthers playing both pitcher and shortstop. He batted .394 this season with 14 RBIs and 39 total hits, while scoring 24 runs and stealing five bases. He also pitched 32.1 innings on the mound and held an ERA of 4.11 with 28 strikeouts.

Third Base: Michael Hiers, senior, Briarwood. Possibly the best athlete in the county, Hiers spent time at third base and pitcher. He batted .418 with 31 RBIs, two home runs and 11 doubles at the plate. He also went 6-2 on the mound with an ERA of .881, one of the lowest in the county.

Outfield: Kevin Dowdell, senior, Calera. A fun player to watch in the field and at the plate, Dowdell batted .378 during his senior season with 32 RBIs. He hit five home runs to finish second in the county and had a total of 37 hits, 42 runs scored and 16 stolen bases.

Outfield: Christian Hall, junior, Calera. Hall was also one of the best outfielders this season playing in left field for the Eagles. He batted .356 with 29 RBIs and hit three home runs. He totaled 36 hits and 29 runs with seven stole bases.

Outfield: J.C. Parker, senior, Thompson. A passionate and hard-working player, Parker played left field and pitcher. He batted .377 this season with 25 RBIs, and hit two triples and 10 doubles as part of his 43 hits. Parker also pitched 61 innings this season and held an ERA of 3.2 with 57 strikeouts.

Designated Hitter: Landon Cato, senior, Oak Mountain. Cato played third base this season and was one of the most powerful hitters in the county. He finished the season with a batting average of .430 and a county-high 42 RBIs. He led the county with six home runs and also added 16 doubles and one triple as part of his 49 hits. He also scored 36 runs and swiped four bases.

Utility: Tyler O’Clair, senior, Calera. Mr. Do-it-all. O’Clair could play just about every position, dominating on the field, on the mound and at the plate. He batted .301 this season with 15 RBIs and picked up 27 hits while scoring 11 runs and stealing two bases. On the mound, he pitched 50 innings and held an ERA of 0.84, while striking out 85 of the batters he faced and allowing a county-low 23 hits.

Pitcher: Emmitt Hudspeath, senior, Chelsea. Hudspeath led the team in innings pitched with 51.1 and held an ERA of 1.5 with 55 strikeouts this season. The senior gave up just 17 walks and went 6-2 overall.

Pitcher: Gene Hurst, senior, Oak Mountain. Hurst ended the season with a 5-2 record and posted an ERA of 1.88 in 55.2 innings pitched. More impressively, he allowed just 18 walks in those 55 innings and struck out 60 batters.

Pitcher: Cole Fincher, senior, Vincent. The senior led the Yellow Jackets in innings pitched with 50 and posted an ERA of 1.98 with 58 strikeouts. He allowed just 12 walks and went 7-2.

Pitcher: Brendon Case, senior, Chelsea. Case pitched 43.2 innings this season and held an ERA of 0.962 while striking out 64 batters. He finished the year with a perfect 6-0 record.

Catcher: Nick Ragsdale, senior, Helena. A big reason the Huskies almost repeated, Ragsdale batted .301 at the plate and had 31 RBIs. He also picked up four home runs and 14 doubles this season.

First Base: Kasey Clark, junior, Pelham. Clark held a batting average of .382 this season and posted 15 RBIs. He hit 13 doubles and one triple as part of his 34 hits.

Second Base: Myles Brown, senior, Thompson. The speedy second baseman led the county with an unreal 30 stolen bases this season. He also had a strong bat picking up 46 hits to finish third in the county. He held an average of .343 this year and scored 38 runs.

Shortstop: John Stephen Heacock, junior, Helena. Held a batting average of .325 to lead the Huskies this year and added 28 RBIs to his resume. He also hit eight doubles for the Huskies.

Third Base: Hudson Hartsfield, senior, Briarwood. A player that could play all over the field, Hartsfield finished the season with a batting average of .400 and totaled 22 RBIs and nine doubles.

Outfield: Christian Hall, junior, Calera. Finished second on the team with a batting average of .356 and also picked up 29 RBIs. He hit three home runs, had 36 total hits, scored 29 runs and picked up seven stolen bases.

Outfield: Nick Freeman, junior, Thompson. Freeman was a gutsy player this year for the Warriors and ended the season with a batting average of .325. He added 16 RBIs and posted two doubles and two triples as part of his 39 hits this season. He was also able to pick up 15 stolen bases.

Designated Hitter: Malik Inabinette, Sophomore, Montevallo. A very fast and athletic player, Inabinette held a batting average of .448 and had 25RBIs. He ended the year with 30 hits, including seven doubles and four triples and finished second in the county with 22 stolen bases.

Utility: Colton Ledbetter, sophomore, Spain Park: Led the Jags with a batting average of .361 and picked up 30 RBIs on 35 hits this season.

Utility: Sam Dozier, senior, Spain Park: Finished just behind Ledbetter with an average of .359 at the plate and had 31 RBIs off of  37 hits for the Jaguars.

Utility: Riley Watkins, senior, Chelsea. Watkins was the best batter on Chelsea’s team and deserved a spot on this team with his batting average of .426. He also posted 10 RBIs and totaled 26 hits.