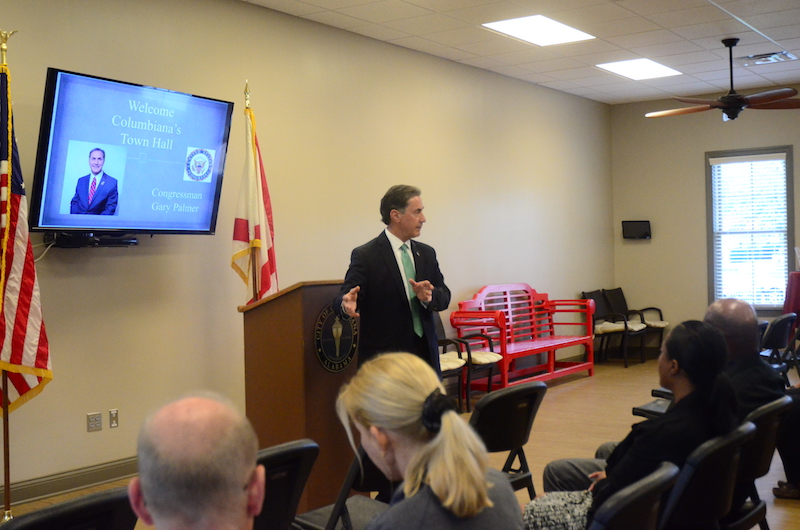 COLUMBIANA – Columbiana residents and members of surrounding communities gathered at the Columbiana Senior Center to ask questions hear updates about what is happening in Washington D.C. from Congressman Gary Palmer during a Town Hall event on the evening of Tuesday, May 29.

“I appreciate personally the congressman choosing to come to Columbiana for this Town Hall meeting. These things are important, and I’m not sure that everybody realizes exactly how important they are,” Mayor Stancil Handley said. “What an honor for us, one of the smaller cities in his area, District Six.”

Palmer began his presentation by talking about his early life in Hackleburg and how he was the first person on both sides of his family to attend college.

“My daddy had an eighth-grade education, was blind in one eye, and what he understood was work,” Palmer said.

Palmer said he believes the country is moving in the right direction with the Tax Cuts and Jobs Act, which was approved by Congress in December 2017. Palmer said the tax cut allowed many businesses to give bonuses to employees and hire new people.

“One of my main objectives was to get the corporate income tax rate down so we could be competitive, have a fair rate for small business because small business is the engine of our economy and to reduce the complexity and bring certainty to the tax cut,” Palmer said. “The last time we did major tax reform was 1986. I went back and looked at the makeup of our economy in 1986, and it doesn’t look like the economy we have today. We had a tax code that was made for 1986 that we were trying to make work for now.”

Palmer said Congress is working on reforming and updating outdated business regulations. He said many new businesses were negatively affected by obsolete regulations.

“I talked to a company that builds locomotives that pull trains. They were still having to comply with regulations that applied to steam engines,” Palmer said. “Money is like water. It will always seek the path of least resistance. The more complex the regulations and tax code, and the higher the rates, the more that money is going to take an easier path to get a return.”

Palmer said he also believes that the country is on the right track with the health care reforms. Over a ten-year period, Palmer said the government has sent out $140 billion in improper government-wide and $36 in improper Medicaid payments.

“We’re working to get Medicaid block-granted to the states, so we can reduce inefficiencies in Medicaid,” Palmer said.

After Palmer gave updates, members of the audience had the opportunity to ask questions about different issues. The first question Palmer asked was about how he predicts U.S. Sen. Doug Jones will “fit in” in Washington D.C.

“I think Doug’s going to have to vote the way Schumer needs for him to vote, and he’s going to have a huge, huge test if Justice Kennedy retires at the end of June, which we expect he will,” Palmer said.

In light of Columbiana having been chosen as a national opportunity zone, Handley asked in other federal initiatives to improve the quality of life for residents of small towns. Palmer said broadband will help residents in rural areas with limited access to medical care, as well as attract new businesses to certain areas.

“That’s one of the things that I’ve really been pushing at the federal level as part of our infrastructure package,” Palmer said.

Palmer also answered questions about his views of the current Republican leadership, school safety and the national budget.

Shelby resident Brent Spencer, who came to the event with his wife, said he was interested to learn about the happenings in Washington D.C. and agreed with the majority of the views Palmer expressed.

“He reiterated some of the comments I had. I’m hopeful he’ll continue to work hard for the state of Alabama,” Spencer said. “He’s got really good ideas about broadband and infrastructure.”