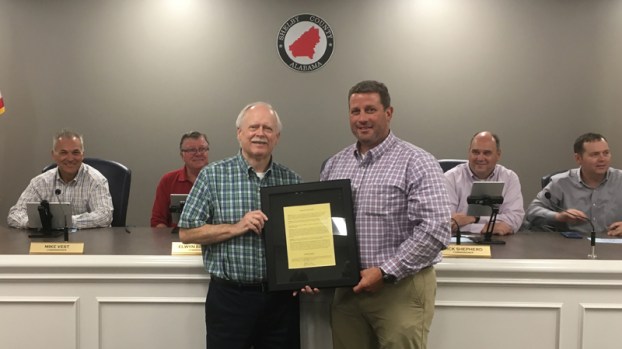 Retiring Chief Financial Officer Butch Burbage, left, is presented a framed copy of a resolution in his honor by Shelby County Commission Chairman Jon Parker during the meeting on May 29. (REPORTER PHOTO/STEPHEN DAWKINS)

COLUMBIANA – The Shelby County Commission honored longtime Chief Financial Officer Butch Burbage before and during its meeting on Monday, May 29.

Burbage retired after serving as the county’s CFO/finance manager since 1996.

A reception was held before the meeting at the Shelby County Administration Building, and then a resolution in his honor was passed during the meeting.

“William B. ‘Butch’ Burbage Jr. has served Shelby County and its citizens with distinction, dedication, excellence and untiring effort during his 22 years of service…,” the resolution read and continued, “is hereby with gratitude officially commended and thanked for his exceptional record of professional achievement and dedicated service…with best wishes for good health and happiness during his years of well-deserved retirement.”

Commission Chairman Jon Parker noted that Burbage warned officials about an impending recession in the late 2000s and worked to buffer the county.

Burbage said better economic times have returned to the county, state and country but encouraged the commissioners to retain their conservative fiscal approach.

“Continue to be responsible or I’ll come back as a private citizen,” Burbage warned lightheartedly. “It’s been an honor—it really has.”

•Was presented a six-month financial review for Fiscal Year 2018 by CFO Cheryl Naugher. Through six months, the county’s General Fund revenues are up 6.2 percent over 2017 ($42.3 million compared to $39.8 million) and up 2.5 percent over budget ($41.2 million). Highway Department, lodging and environmental services revenues are also up over the previous year and budgeted amounts. Water services revenues are above budget but below the previous year’s numbers, mostly because of the amount of water Shelby County sold to neighboring utilities during a drought period.

•Heard from County Engineer Randy Cole that Subtropical Storm Alberto has caused more problems with downed trees than his department has seen since the tornadoes of April 2011, with more than 50 calls received from residents. Cole said workers cut the trees out of the roadways initially and then return to remove the trees completely. Because of the number of downed trees, the removal step could take several days in some cases.

PELHAM – A new tradition began on Saturday, May 26, at the Pelham Cemetery to honor the city’s veterans in... read more