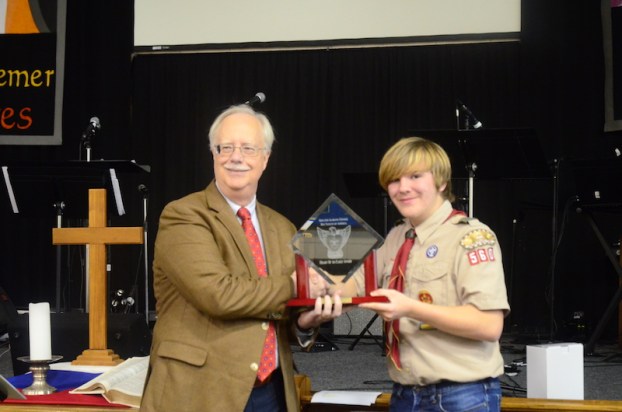 Probate Judge Jim Fuhrmeister receives the Heart of the Eagle Award at the annual Mayor's Breakfast. During the event, thousands of dollars were raised for the Greater Alabama Council's "Scoutreach" program. (Reporter photo/Amalia Kortright)

COLUMBIANA – The city of Columbiana raised money for local Boy Scouts and honored a retiring county official during the annual Mayor’s Breakfast for Scouting at Columbiana United Methodist Church on Wednesday, May 30.

Boy Scout volunteer Larry Walck said scouting is important to him and many others because of the strong values it instills.

“The values I learned are still with me today. I think I appreciate those values more than I ever have,” Walck said. “Those values include duty to God and duty to country. We’ve seen that here this morning with the flag presentation, invocation, the Scout Oath and Scout Law. Those values run very deep in me.”

According to Walck, the Greater Alabama Council of Boy Scouts of America’s “Scoutreach” program provides financial aid to youth who would not otherwise have the opportunity to join Boy Scouts or participate in certain activities.

“Our council this past year supported over 883 youth through the ‘Scoutreach’ program,” Walck said. “‘Scoutreach’ provides uniforms, a handbook and advancement awards through youth that need that support.”

Mayor Stancil Handley later announced that the event raised more than $5,000 for those helped by the ‘Scoutreach’ program.

Retiring Shelby County Probate Court Judge Jim Fuhrmeister was named as this year’s Heart of the Eagle Award recipient. Fuhrmeister said he does not know how he would have turned out if it were not for scouting, but he does know how he is today because of it.

“I think it’s scouting that has given me the devotion to serving the public. That’s what I view being the probate judge or any other elected office as. You’re a public servant,” Fuhrmeister said. “When Patrick (Kennedy) called me at first, I was very reluctant to do this because I don’t feel like I deserve it. I’m just doing what I’m supposed to do.”

Fuhrmeister said he has not earned his accomplishments by himself, but has relied on the support and teamwork of other people.

According to Greater Alabama Council Scout Executive J.T. Dabbs, scouting has been a long-standing tradition for many families in the Columbiana area.

“We’re grateful for this community. The dollars raised here will go to families in Shelby County,” Dabbs said. “Scouting has been in Columbiana and Shelby County for a long time, and they’ve done a lot of work.”

By NEAL WAGNER / Managing Editor ALABASTER – The Alabaster City Council will gather the public’s feedback during an upcoming... read more