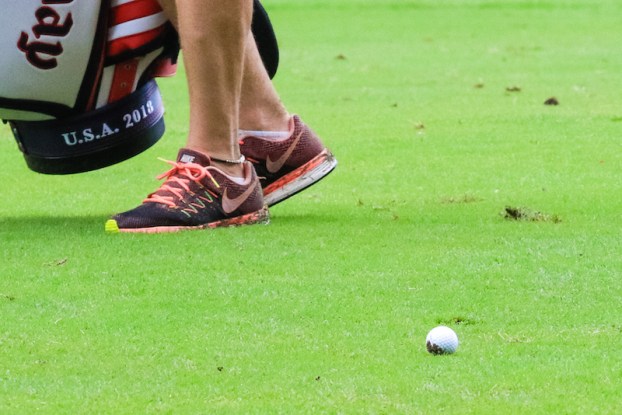 Mud balls like the one above were popular on day one of the 73rd U.S. Women's Open thanks to four-plus inches of rain in the days leading up to the tournament. (For the Reporter/Dawn Harrison)

NORTH SHELBY – Coming into the first round of the U.S. Women’s Open at Shoal Creek on Thursday, May 31, the topic of conversation was the torrential rain the course had received since Sunday due to Sub-Tropical Storm Alberto, which dumped four-plus inches of rain on the venue.

The USGA, who has never allowed lift, clean and place, stuck with that decision and made the players play the ball down. For the most part, the golfers were extremely impressed with the course after day one.

“It’s incredible that we played today and got a practice round in yesterday,” said Michelle Wie, who sits just two shots off the lead in a tie for second. “The greens staff did an amazing job. I mean the greens were perfectly fine. The fairways are fine. You would not have known that it rained that much.”

The scoring on day one also reflected Wie’s pleasure with the course as 24 players shot under par and three are tied for the lead at 5-under par after Ariya Jutanugarn, Sarah Smith and Jeongeun6 Lee all three shot opening round 67s.

Wie herself finished the first round at 3-under par and was joined by ….

“The conditions were fine,” Kang said. “I mean, I definitely got a few mud balls out there, but I think it’s fine. It’s part of golf. The greens are rolling amazing. I don’t know how they drained that water, but it’s fast. I realized it was fast after smashing the first few putts by.”

While mud balls can affect the flight of the ball, every player seemingly had at least one to deal with as it just became a part of the first round of the tournament.

“I’m not going to lie, there’s certainly mud balls on pretty much every single shot. It’s not ideal, but what can you do,” Mel Reid said. “It’s just the way it is. It’s the same for everybody.

“I mean, I have to give them credit, the staff here has done an exceptional job to get it in the shape that it is.”

While the greens were fast, the fairways were still fairly soggy, which led to a lot of distance being cut off of drives. It caused several to struggle early in their rounds, including leader Jutanugarn.

“The course is still pretty wet so it was pretty tough because we’re not going to get much distance, which made it difficult to hit the second shot on the green,” she said.

The softer course conditions are an advantage for players that do hit their drivers further in the air, however.

“You aren’t getting any run out of anything,” Reid said. “For me, I carry my driver quite far. It’s an advantage for the longer hitters who carry it in the air.”

While there were a few players that didn’t like all of the side effects of a wet course, most of them couldn’t help but rave about the job the golf course staff and the USGA had done to get the course ready to start the first round.

The majority of players were only able to get in one full round of practice between Monday and Wednesday, while the course was closed most of the day Tuesday, which isn’t exactly ideal for a tournament of this magnitude, but the players didn’t seem bothered by it and placed a lot of faith in their caddies.

By ALEC ETHEREDGE | Sports Editor The athletes at the AISA and ACSC level in the county are continuing to... read more