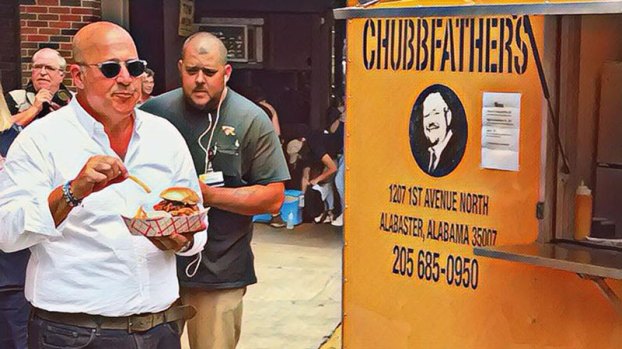 BIRMINGHAM – Chubbfather’s owner Will Cholewinski didn’t know it at the time, but someone was looking for him when he brought his food truck to the Good People Brewing Company in Birmingham on May 21.

“A lady came up and got her food, and then came back about 15 minutes later and asked how she could get in contact with the owner,” Cholewinski said. “I told her that was me, and she said her name was Courtney and she is head of production for Andrew Zimmern. She said she had heard about us, and several people had told them they needed to check us out.”

Zimmern’s crew was in the state preparing to film an episode of his upcoming show “The Zimmern List” in Birmingham for the Travel Channel, and looked up Chubbfather’s on social media. When they saw the restaurant’s food truck was going to be a Good People, they traveled to Birmingham to meet Cholewinski.

A few days after meeting Zimmern’s crew, the Food Network and Travel Channel were making plans to put the Alabaster restaurant on television. From May 29-31, Chubbfather’s was one of only three food trucks in the state selected to be featured on a new show set to air in August after the current season of The Great Food Truck Race ends.

Cholewinski and his wife, Stephanie, traveled to a sound stage in Homewood on May 29, and brought their food truck to the UAB campus on May 30 and May 31 as crews filmed an episode of the new show.

Zimmern also stopped by the Chubbfather’s food truck while in Birmingham filming an episode of “The Zimmern List,” and spoke highly of the restaurant’s signature offering: The Zydeco burger, which is a bacon cheeseburger with lettuce, tomato, Cajun horseradish and onion straws.

“He was a really nice guy,” Cholewinski said of Zimmern, noting the episode also focused on Chubbfathers’ “Feed the People” campaign to help provide food to those in need in the community. “He was thoroughly complimentary of our food. He said our Cajun horseradish was better than the remoulade he makes at home.”

Cholewinski said the new food truck show doesn’t have an official name yet, and said he was not yet sure when the episode filmed in Birmingham will air.

On June 1, Cholewinski said the past few weeks have been exciting, and said he is grateful to those who reached out to the Food Network to suggest the network feature his restaurant.

First round of U.S. Women’s Open has 24 players under par and within four shots of lead

By ALEC ETHEREDGE | Sports Editor NORTH SHELBY – At the completion of the first round of the 73rd U.S.... read more