COLUMBIANA – An Alabaster man was recently put behind bars after he allegedly injured a victim with a butcher knife.

Christopher Haven Johnson, 27, who lists an address on Navajo Trail, was arrested by the Alabaster Police Department and charged with assault in the second degree on Thursday, May 31. 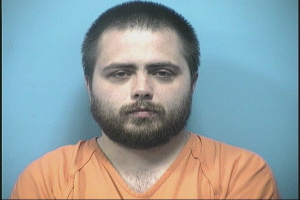 According to court documents, Johnson allegedly caused injury to a male victim “by means of a deadly weapon or dangerous instrument” after he allegedly threw a butcher knife at the victim and hit him in the back.

Second degree assault is a Class C felony, which is punishable by a maximum prison sentence of 10 years.

As of June 1, Johnson remained at the Shelby County Jail on a $5,000 bond. Johnson’s case was assigned to Shelby County District Court Judge Daniel A. Crowson, and the date for Johnson’s preliminary hearing has not been set.