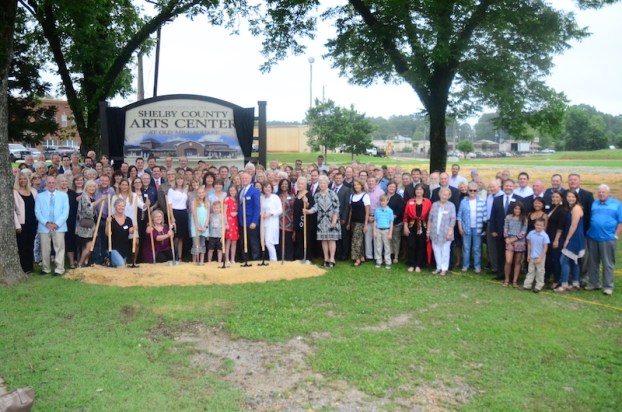 Dozens of people celebrated with the SCAC as it broke ground on the new Shelby County Arts Center on May 31. (Reporter photo/Amalia Kortright)

SCAC Executive Director Bruce Andrews said the ceremony marked the beginning of construction on the 30,000-square-foot building, 20,000 of which will be used by the SCAC. The remailing 10,000 square feet will be utilized by the city of Columbiana as a multi-purpose event venue.

The Arts Center will feature dedicated studios for visual arts, pottery and sculpting and metal arts, as well as music performance practice suites. The Art Center’s new 200-seat Black Box theater will be larger than its current one, but just as intimate, according to Andrews. There will also be an art creation courtyard and a 500-seat stage area outside of the building.

“I find it hard to convey to you what a blessing this building will be,” Andrews said in his speech at the ceremony.

Andrews said he has seen firsthand how the arts can be transformative and redemptive, and the new building will help the SCAC broaden its current programs and classes to involve more people.

“We’re not going to do anything different from what we’re doing now, we’re just going to expand. Our proof of concept has been years in the making,” Andrews said. “We’re ready to explode all of these things in a bigger platform.”

Congressman Gary Palmer, who was present at the groundbreaking, said the addition of the Arts Center will be beneficial to everyone in the county.

“I think this is a quality of life improvement for Shelby County,” Palmer said. “We have a lot to look forward to in Shelby County, and this is just another addition to that.”

County Manager Alex Dudchock said he believes the Arts Center will prove to be a wise investment in the future.

“It’s about not being static in how you think. People would say, ‘That’s a risky investment,’ but there’s risk in everyday life,” Dudchock said. “We don’t look at it as a potential crisis. We look at it as an opportunity.”

“I think the support from throughout the county and outside the county has made me very proud, and it focuses on our vision of becoming an entertainment destination for Central Alabama,” Handley said.

Andrews and Handley said the construction and establishment of the Arts Center was only possible through an alliance between the SCAC, the city and the county.

“This collaboration between the county, the city of Columbiana and the Arts Council has branched so many positives,” Handley said. “In this project, there’s not just one of us. There’s all of us.”

According to Andrews, the Arts Center is expected to open in mid-2019. In the meantime, Andrews said the SCAC will be working out of its current building on Mildred Street. He encouraged anyone interested in the new Arts Center to get involved with the SCAC as soon as possible.

“If people are excited about the new building, they don’t have to wait for it to be built,” Andrews said. “They can connect with us now.”

By NEAL WAGNER / Managing Editor BIRMINGHAM – Chubbfather’s owner Will Cholewinski didn’t know it at the time, but someone... read more