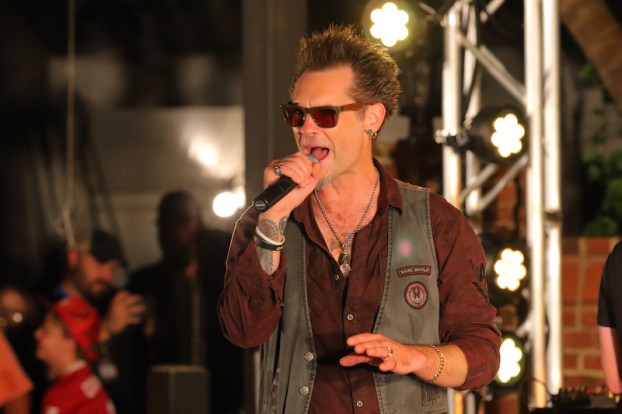 Bo Bice headlined the Season Opener Jam benefit concert on Friday, June 1, that raised more than $7,000 for the Helena Miracle League. (For the Reporter/Eric Starling)

HELENA–The Helena Amphitheater was rocking the night of Friday, June 1, as an inaugural benefit concert raised thousands of dollars for a great cause.

The popular Helena First Friday event returned on Friday, June 1, and for the first time, the popular event partnered with the Helena Miracle League to bring a benefit concert to Old Town Helena.

At the conclusion of First Friday, hundreds of Helena residents and visitors made their way to the amphitheater to enjoy the inaugural Season Opener Jam.

The Season Opener Jam concert featured Bo Bice, 7 Stone Riot and Sanchez Tanniehill for a free show that raised more than $7,000 for the Helena Miracle League’s goal of bringing a special ballpark to Helena.

Bo Bice, who gained fame after finishing as runner-up in the fourth season of American Idol in 2005, came back to his former hometown of Helena to give back in a big way.

Bice is officially serving as the ambassador for the Helena Miracle League. The future home of the 125-foot baseball field will sit on a plot of land roughly 2.5 acres behind Joe Tucker Park that will feature ADA accessible restrooms, a pavilion area, concession stand and a disability accessible parking lot.

The Helena Miracle League’s mission is to provide opportunities for children with disabilities to play Miracle League Baseball, regardless of their abilities, promote community support and sponsorship of Miracle Leagues and promote the construction of special facilities that meet the unique needs of Miracle League players and their families.

Other alternative uses for the future field could include visits from nursing home members for exercise, kickball, soccer and Special Olympics events.

The Helena Miracle League continues to host a wide-range of fundraisers to help with the project and more information can be found at Facebook.com/HMLAngels/ or Helenamiracleleague.com.