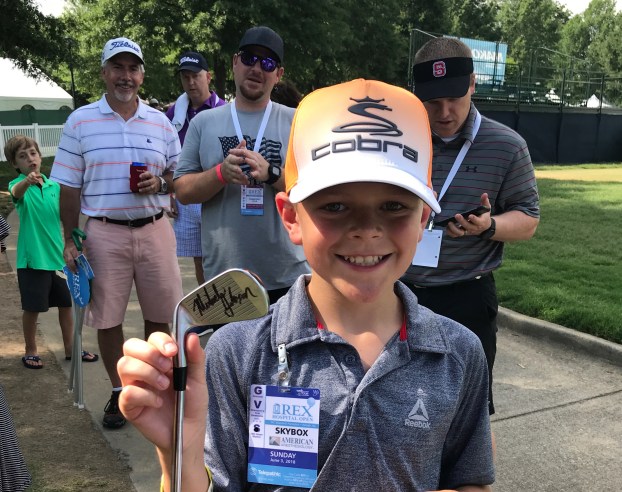 Michael Johnson signed a club and shared it with a young fan after finishing T4 at the Rex Hospital Open. (Contributed)

RALEIGH, N.C. – It was an up and down week of emotions for Michael Johnson at the Rex Hospital Open in Raleigh, North Carolina after he took a three-shot lead into the final round of the tournament on Sunday, June 3, before finishing tied for fourth and two shots out of first place.

The former Spain Park golfer took the 54-hole lead after shooting a 65 on Saturday thanks to three birdies in a row to close out his round, which got the young golfer excited to go out and chase down his first professional victory.

“This is what we play for,” Johnson said after the third round. “To be in the final group on Sunday and have the crowd follow you, that is what we play for. You sign up to be a little nervous on the first tee and have a chance to win. If I go out there and play well and lose, then somebody earned it and I’m fine with that.”

What he closed that quote with became key and showed the demeanor by which Johnson carries himself with at a young age.

Through three holes of the final round, Johnson was 1-under for the day and in good shape to pick up his first professional win, but after the birdie on three, Johnson bogeyed No. 4 to give the shot back immediately.

He then went on to close out his front nine with a double bogey on the par-5 ninth, which is what put him behind the eight-ball when it came to winning the tournament.

Despite that rough hole, Johnson was able to rebound with a steady back nine that featured six pars in a row, followed by two birdies in a row, and a par on the final hole of the tournament.

It wasn’t enough to pick up the win, as Joey Garber shot a final round 66 to soar up the leaderboard for a one-stroke victory, but Johnson was in high spirits after the round.

So much so, that he signed one of his irons and handed it to a young fan after his round.

It’s a big confidence boost for Johnson, who had missed five consecutive cuts in the last six events coming into the event after finishing in the top 15 three times earlier in the season.

He now has five top 15 finishes this season, including three top 10 finishes and two tie for fourth finishes.

For the time being, Johnson has jumped back inside the magical top 35 on the Web.com Tour money list at No. 28, as the top 35 will earn a PGA Tour card at the end of the 2018 season.

By ALEC ETHEREDGE | Sports Editor NORTH SHELBY – It was a strong week for amateurs at the 73rd U.S.... read more