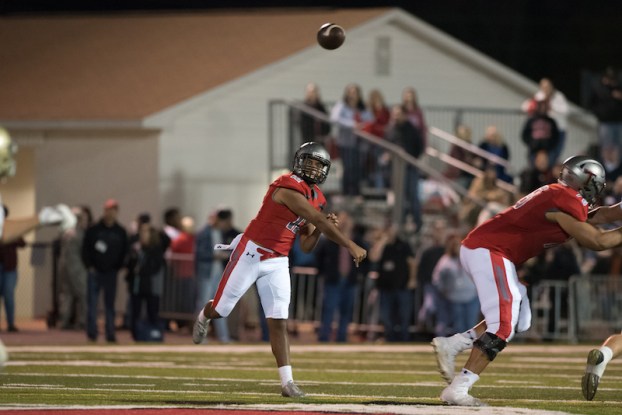 Thompson rising senior quarterback Taulia Tagovailoa has been invited to The Opening, a camp for the top 11 quarterbacks in the country, after finishing eighth in the recent Elite 11 camp. (File)

REDONDO BEACH, Calif. – Thompson rising senior quarterback and Alabama commit Taulia Tagovailoa was one of 24 quarterbacks from across the country selected to compete in the Elite 11 over the weekend of June 1, and by the end of it, he was named one of the 11 best quarterbacks in the country.

Now the Warriors’ star quarterback will move on to the Elite 11 finals, known as The Opening, on June 30, where he’ll compete against the other 11 quarterbacks including instate player and Auburn signee Bo Nix.

Tagovailoa finished the 7-on-7 portion of the camp, which was the final event to take place, going 12-for-17 through the air with three touchdowns and two of his incompletions being drops.

He wowed several scouts and journalists there covering the event, as they couldn’t help but rave about his success on social media.

Committed to Alabama, Taulia is the younger brother of Tua Tagovailoa, who just helped the Crimson Tide capture the National Championship earlier this year.

Taulia is now trying to make a name for himself, and his arm is starting to do that for him.

Coming into last season at Thompson High School, his name was known, but he was still a mystery to most as a quarterback from Hawaii that was moving to be closer to his brother.

By the end of his junior year with the Warriors, however, a star was starting to blossom.

He went on to join another popular Alabama name among the high school ranks when he edged out John Parker Wilson for third all-time in AHSAA history for passing yards after throwing for 3,823 yards and 35 touchdowns during his junior season.

Taulia helped the Warriors go from 5-5 the year before he got there to 12-1 during his first year with the team.

While the entire team deserves credit, especially a strong crew of defensive players, Tagovailoa had impressed a ton of people in less than a year of living on the mainland.

His recruiting started to pick up steam, and that’s when the Elite 11 took notice and invited him out to this year’s Elite 11 camp.

While he had all of this success and was already committed to Alabama, he was now competing against the best quarterbacks in the country and held his own to be named the eighth best quarterback at the event.

A lot of people will point to him as being a little bit undersized, but his arm strength and accuracy are as good as any in the country.

Now on June 30, he’ll have another chance to prove he is in fact elite.

By ALEC ETHEREDGE | Sports Editor Another baseball season for Shelby County is in the books and it was a... read more