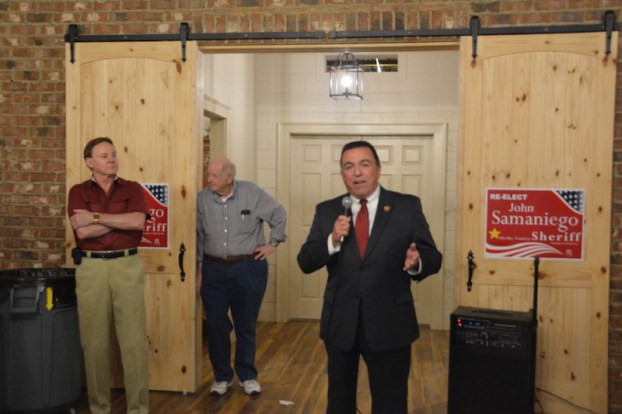 Incumbent Shelby County Sheriff John Samaniego will continue to serve the county in his position for the next four years, according to the 2018 state primary election results that came in on the night of Tuesday, June 5.

Because no Democratic candidates ran for sheriff, Samaniego will face no opposition in the November general election. He is set to officially begin his second term in January 2019.

Samaniego, who ran as a Republican against Jefferson County Sheriff’s Office Deputy Ken Bailey, received a total of 18,639 votes, which amounted to 69.99 percent with 44 out of 45 precincts reporting. A total of 26,631 ballots were cast in the Shelby County Sheriff’s election, not counting the 58 provisional ballots that will be counted next week.

At Samaniego’s election night reception, which was held at the Old Post Office at Siluria Mills in Alabaster, he thanked voters for their support.

“I’m really grateful to the citizens of Shelby County for believing in me and the men and women who have been doing the endless job of keeping the county safe,” Samaniego said.

Samaniego credited members of the Shelby County Sheriff’s Office, who he said are committed to ensuring the safety of every Shelby County residents, for much of his success.

“I’m very blessed to have fantastic deputies,” Samaniego said. “They go over and beyond for Shelby County residents.”

“We’re the only Sheriff’s Office in the state that’s CALEA (Commission on Accreditation for Law Enforcement) accredited, and I’m glad to say we have the only accredited jail in the state,” Samaniego said. “Our policies are backed up by case law. It was a lot of hard work to achieve, from the commanders to the corrections officers.”

During his campaign, Samaniego also cited his work to strengthen relations between the SCSO and the Shelby County Commission, the SCSO’s efforts to combat the county’s drug presentation through its partnership with Compact 2020 and the increased presence of the Shelby County Drug Enforcement Task Force and the establishment of the SCSO’s North Substation in Greystone.

Within the next three months, Samaniego said he will be working on a strategic plan that will focus on enhancing existing outreach programs and increasing opportunities for SCSO deputies.

“I’ve always supported movement within the agency,” Samaniego said. “It’s all a pile of puzzle pieces, but I’ve identified all of them and will be working to put them in place.”

Samaniego reminded residents that he and SCSO deputies strive to be continually accessible to the public.

“My door is always open to them, and my deputies will continue to be considered their deputies,” Samaniego said.

Samaniego defeated Bailey by 10,647 votes. As of June 5, Bailey could not be reached for comment.

COLUMBIANA – The city of Columbiana is encouraging local families to mark their calendars for the 32nd annual Liberty Day... read more