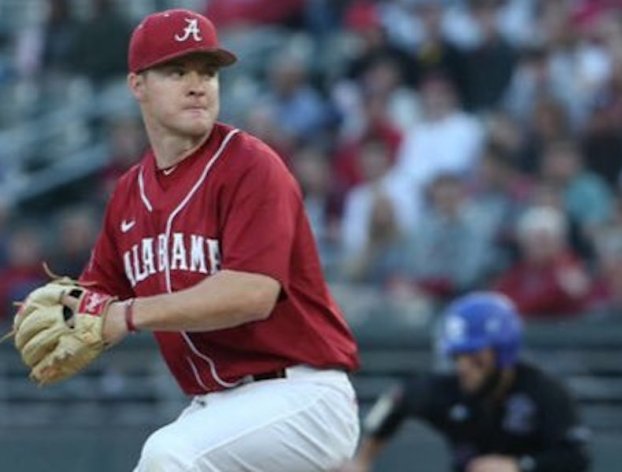 The pick came on Tuesday, June 5, the second day of the draft and was a deserved honor for the Alabama player who just finished his senior season.

During his time at Alabama, Walters set some impressive marks and etched his named in the history books.

He finished his career with 52 total starts, which was tied for the most by any pitcher in program history. He tossed 292 strikeouts in his four years with the Tide, which was third most in school history. He also finished fourth in both career innings pitched (295) and batters faced in a career (1,292).

One of the biggest highlights of his career, however, came in his last start wearing crimson and white when he squared off against the Ole Miss Rebels.

The senior closed out his storied career with a 3-0 complete-game shutout victory to earn the SEC Co-Pitcher of the Week award. He allowed just four hits and two walks during the win, while striking out seven.

It was a special moment that made all of the highlight reels, and one he will watch back for the rest of his life.

Before he took to the field for Alabama, however, Walters was a local star at Thompson High School.

While at Thompson, he became the 14th overall player and fifth-ranked right-handed pitcher in the state of Alabama.

In 2013, Walters helped the Warriors go 38-10 and find the No. 1 ranking in the state for the majority of the baseball season. He went 10-0 that year with a save and held an ERA of .78 after allowing just seven runs on 35 hits.

He also gave up just 28 walks that season and struck out 96 batters faced, which earned him a spot on the All-County team, All-State team and All-Metro team. All of those accolades and an incredible year helped Walters become a finalist for the Gatorade Baseball Player of the Year award.

Having made the transition from high school to college, Walters will now look to make the biggest transition of life—from college to the pros.

It’s a dream for most, but a dream come true for Walters. And while there is work to be done to get where he wants, it’s a moment he won’t take for granted.