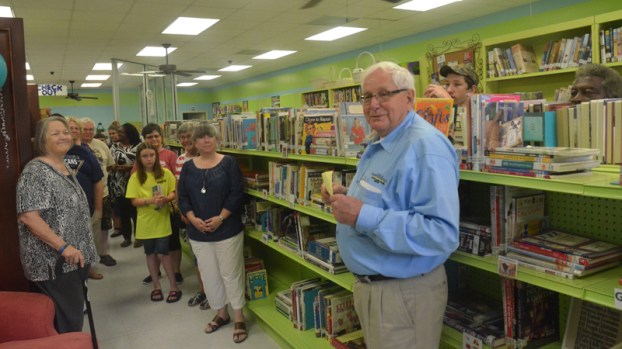 HARPERSVILLE – The opening of the new location of the Harpersville Public Library was marked with a ribbon cutting ceremony on Friday, June 1.

The library is now housed at the former Harpersville Pharmacy location, across Alabama 25 from Harpersville Town Hall.

The town purchased the shopping center with plans for a senior center and more, and the library is the first tenant to move in.

Mayor Don Greene said the library location was an empty space as recently as January.

“It took quite a while, and there were a lot of people involved with that,” Greene said and thanked those who contributed to the effort, including the Harpersville Street Department and the Friends of the Library group.

At the ceremony, Brian Lay and Mickey Norwood with Dollar General presented a $1,000 donation to the library.

“We appreciate Dollar General for what they mean to Harpersville,” Greene said.

The library first opened in 2005 and is now at its third location. The late Bobbie Reynolds, mother-in-law of Library Director Marsha Moore, was instrumental in founding the library.

Moore began helping Reynolds and later took over as director.

“I love the people of this community,” Moore said and added that residents are always help by donating books to the library.

The Harpersville Library’s summer reading program has begun and will continue from 1-3 p.m. each Thursday in June.

The program is for children that have completed K4 through fifth grade and is being held at The Lighthouse.

“It is rocking when we get all those kids together,” Moore said. “We love working with the kids.”