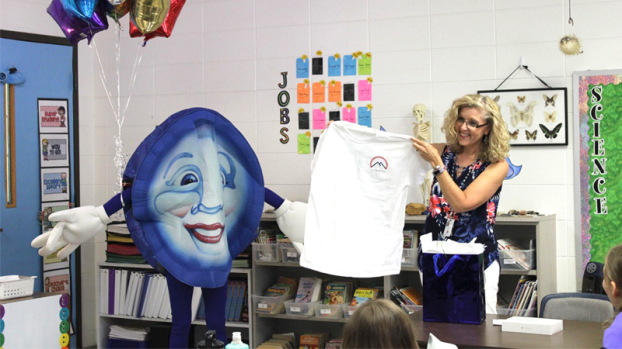 NORTH SHELBY– An Oak Mountain Elementary School teacher was recognized last month for going above and beyond both in and outside of the classroom.

During Teacher Appreciation Week, Full Moon BBQ showed their appreciation for Janice Lacey, a third-grade teacher at OMES. Teachers in the Birmingham area up for the award were nominated in April, to later be selected by the Full Moon BBQ team through the #ThankATeacher campaign.

Lacey was truly surprised and “floored by the honor.” After receiving an email informing her about the grand prize award, the third-grade teacher said she couldn’t believe it was true. Lacey assumed it was just one of those “funny emails,” little did she know the award wasn’t spam or any funny business.

As the grand prize winner, Lacey received a couple of goodies for her and her class. The teacher was gifted an Apple iPad, $100 gift card to the BBQ joint, and a $50 gift card for school supplies. Her class received free T-shirts and a visit from Full Moon’s Moon Man.

After nine years of teaching, Lacey said the announcement “touched her heart.” This was her first year making the “hard transition” to teaching the third grade and was moved that parents noticed what she did with their children and nominated her.“As a teacher you work really, really hard,” Lacey said, as teachers work around the clock, many spending their weekends grading papers and making lesson plans. She says she doesn’t teach for accolades but because “it’s what I’m called to do.”

Lacey is still planning on what goods to purchase to upgrade her classroom. Rather than keeping the gifted iPad for personal reasons, she has decided to use it as a learning tool for the upcoming school year, allowing her students to use it for educational “computer-based programs.” She says her class will use it to focus on research, math skills and creating learning paths.

Lacey’s students will have access to the device this upcoming school year. Students at Oak Mountain Elementary head back to school Tuesday, Aug. 7.

NORTH SHELBY – Shelby County Schools’ first summer art camp was so well received that it had to split over... read more